Yankees Walk Off Winners Against Twins

By Chad Raines - August 18, 2015
The Yankees came off a road trip that ended with three games against the red-hot Toronto Blue Jays and won two out of three in the Rogers Centre. After falling in Sunday’s finale, the Yankees looked to get back on track. The Yankees sent Bryan Mitchell out on a spot start while the Minnesota Twins sent Kyle Gibson to the hill. Today’s game started a three-game series between the two in New York. 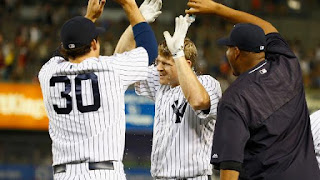 1st Inning
Brian McCann got the scoring started for the Yankees when he hit a 3-run home run off of Kyle Gibson with two outs and men on first and second. The Yankees led 3-0 after the first inning.
2nd Inning
In the top of the 2nd, ex-Yankee Eduardo Nunez hit a comeback line drive that hit Bryan Mitchell in the face. It was an extremely scary injury as it ricocheted off of his face into center field. Never mind the score, the crowd at Yankee Stadium was silent as it hoped Mitchell would be okay. It turned out to be a nasal fracture, which hopefully means he will be back soon. He’s an integral part of the Yankees bullpen and we at BBB wish him the best in his recovery. The Twins scored on the Nunez single.
3rd Inning
The Twins took the lead and made it 4-3. Caleb Cotham came into the game for Mitchell after he left; he gave up a home run to Miguel Sano and then the go-ahead single by Rosario. The Yankees, however, responded as Brian McCann singled to right to plate two. The Yankees led 5-4 after three innings.
4th Inning
Aaron Hicks homered to start the 4th and the Twins tied the game at 5. Chasen Shreve entered the game and ended the 4th inning quickly. The Yankees went down in order in the 4th.
5th Inning
Shreve gave up a home run to Plouffe and the Twins once again rallied to take a 6-5 lead. The Yankees went down in order in the bottom of the fifth inning.
6th Inning
Justin Wilson relieved Shreve but gave up an RBI single to Plouffe and the Twins made it 7-5. The Yankees wouldn’t go down easily. Carlos Beltran continued his red-hot bat by homering to left field to tie the game at 7. He’s been on fire lately and the Yankees wouldn’t have been the same without his production.
7th Inning
Dellin Betances relieved Justin Wilson with two outs but a caught stealing by Nunez ended the inning. The Yankees faced Ryan O’Rourke and Casey Fien and loaded the bases with one out but a McCann pop out and Beltran strikeout left the game tied at 7.
8th Inning
Neither team threatened in the 8th.
9th Inning
Neither team threatened in the 9th.
10th Inning
Andrew Miller used an 8-pitch inning to get out of the 10th inning efficiently, 3 up, 3 down. The Yankees finally won a walk-off win. Greg Bird led off the bottom of the tenth with a double and McCann’s double (Bird went back and tagged but Hicks couldn’t catch the ball, so Bird only got to third), followed by Beltran’s intentional walk loaded the bases with none out. Chase Headley came up and faced Glen Perkins, the Twins closer, and his groundball to short was BOOTED by EDUARDO NUNEZ! The player that the Yankees put on blast for fielding issues couldn’t come up with the ball at the critical point of the game, and the Yankees won 8-7!