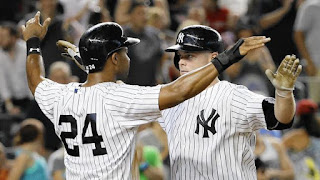 The Yankees came back home from a 10 game road trip which they went 6-4 on. Masahiro Tanaka was on the mound facing off against Henry Owens who was making his debut. The Yankees try to stay hot and keep their division lead at 5.5 games in front of the Blue Jays and the Orioles who have also gotten hot lately.

In the first, Chris Young singled, followed by an Alex Rodriguez walk. Then Mark Teixeira singled to score Young and make the game 1-0 early.

No more runs were scored until the 5th inning, both Tanaka and Owens were still on the mound. Mike Napoli doubled with one out. Then, Alejandro De Aza singled in a bunt to move him to 3rd. Blake Swihart then singled to score Napoli and tie the game at 1. De Aza had moved to 3rd on the single, so Jackie Bradley hit a sacrifice fly to score him and take the lead 2-1.

Chris Young led the bottom of the sixth of with a single and Alex Rodriguez hit a doubles move him to third. Owens was taken out of the game then replaced by Robbie Ross. Mark Teixeira then singled to score Young and the the game back up at 2, Immediately followed by a Brian McCann double to score A-Rod and take the lead 3-2. Carlos Beltran grounded out to score Teixeira and make the score 4-2.

Pablo Sandoval led the 7th off with a solo one run and brought the Red Sox back within 1 run, but they wouldn't score again. Justin Wilson came in for Tanaka at this point. Tanaka finished with 6 innings pitched, 5 hits, 3 earned runs, 1 walk and 3 strikeouts.

The Yankees offense showed up in the bottom of the 7th and scored 9 runs with some help from Brian McCann and Chris Young who both hit 3 run home runs getting 6 of the 9 runs with those.

After Justin Wilson threw 0.2 innings, Dellin Betances came in to throw 0.1 innings. Branden Pinder threw the 8th inning and Nick Rumbelow threw the 9th, all of them shutting down the Red Sox holding on to the Yankees 10 run lead. The Yankees would win 13-3 and keep their 5.5 game lead over the Toronto Blue Jays.

How in the world is Don Mattingly not a Hall of Famer?

By: Chad Raines As many of you know, the Hall of Fame inductees were announced today. And after not being inducted once again in his last appearance on the ballot, I simply do not get why this particular player is not in the Hall of Fame. Let me throw a couple of facts at you, the reader, right now. This Yankee great was a nine time Gold Glover, a six time All-Star, a three time Silver Slugger award winner, an AL batting champion, an MVP award winner, a career . 307 hitter, and a former Yankee captain. As you have probably guessed from the title, this player is Donnie Baseball, Don Mattingly. Considering these accolades, it begs the question: Why on earth isn’t he in the baseball Hall of Fame? (photo via espn.com)
Read more