By Unknown - September 20, 2015
Tonight (Sunday night) was one of the most critical games of the year for the Yankees. After Toronto lost this afternoon, the Yankees needed to win to capitalize on the Blue Jays loss. Matt Harvey, coming back after a near two-week absence from the rotation, started for the Mets against CC Sabathia of the Yankees. Sabathia has been inconsistent all year, sometimes showing signs of consistency but followed up with poor outings. He needed to be on his best against Harvey. Although Harvey started, he was limited to only five innings so the Yankees had a chance to go after the Mets bullpen if they were behind. The Yankees started slowly on offense, relied on Sabathia's pitching to stay close, and then exploded for a five-run sixth inning to lead them to a win in the series finale. 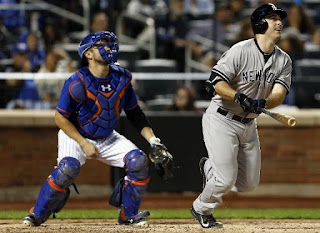 The game started shakily as consecutive doubles by the Mets to lead off the bottom of the first gave them a 1-0 lead. Joe Girardi was ejected in the top of the second after arguing a check swing. After the first inning, Sabathia recovered to pitch five straight shutout innings after and pitched six innings of one-run ball. The Yankees struggled heavily against Matt Harvey, who made his first start in 12 days. He pitched five innings of one-hit ball and completely dominated the Yankees. It looked like the Yankees would waste Sabathia's decent outing with their lack of offense.

However, Hansel Robles came in for the sixth and the game changed dramatically. After Jacoby Ellsbury reached second to lead off after a single and an error, Gardner bunted but Robles threw to third and Ellsbury was safe! Carlos Beltran then doubled to center to make it 2-1 as both Gardner and Ellsbury scored! After Chase Headley struck out with runners on the corners and one out, Dustin Ackley delivered! His 2-out home run into the right field bullpen gave the Yankees key insurance runs and the 5-1 lead! In the seventh inning, the Yankees made it 6-1 when Chase Headley walked with the bases loaded. Jacoby Ellsbury's single to center scored Rico Noel from second and the Yankees led 7-1. After Tim Stauffer came in, Brian McCann's RBI single made it 8-1 before Greg Bird's 2-out home run to left center made it 11-1 and officially a Subway Series blowout. The Mets added a run against Chris Capuano in the eighth but the Yankees completed the series in Queens with a 11-2 win on Sunday.

Looking Forward
The Yankees face off against the Blue Jays for their last series of the year in Toronto. If the Yankees want any chance of winning the division, they must sweep Toronto or at the very least, win two out of three games. Masahiro Tanaka suffered a hamstring strain running the bases against the Mets on Friday; Ivan Nova will replace him for the one start as Tanaka hopes to only miss one cycle in the rotation. The tentative pitchers for the series are:
All three games will start at 7:07 PM ET. Monday’s game is on YES Network while Tuesday and Wednesday’s games will be broadcasted on ESPN nationally.