A Preview of the Subway Series: The Yankees Face the Dangerous Mets This Weekend


An off-day. How blessed we are as fans. No need to struggle over the Yankee offense and lackluster bullpen. One more day where we can pretend we have a chance to win the division. Dellin Betances, Andrew Miller, the rest of the embarrassing bullpen, and the Yankee batters, especially Jacoby Ellsbury, who has struggled recently, can heal their bodies. However, the pain, both with players and fans, will probably resume soon. Tomorrow, the New York Yankees head into Flushing Meadows and Citi Field to face the National League East leader New York Mets in the second half of the 2015 Subway Series. The Mets currently lead the National League East by over seven games and are most likely going to win the division. The Mets rotation is absolutely stacked, with Steven Matz, Noah Syndergaard, and Matt Harvey pitching this weekend. They already have one of the best rotations within the majors and their best pitchers, outside of Jacob deGrom, who lost to the Yankees already this year, are all pitching. 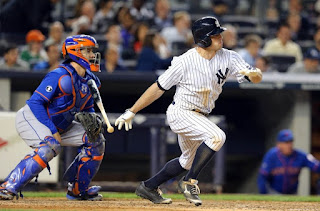 In terms of offense, the Mets did not necessarily stand out prior to the trade deadline. Now, newly-acquired Yoenis Cespedes leads the potent offense, which scored 54 runs in its eight-game winning streak that ended this week. The Mets do not hit many home runs, and their team leader is Curtis Granderson with 23. However, since trading for Cespedes, the Mets have gone 30-11, the best record in baseball. Since coming over to New York, the other Mets batters have woken up as well. They had the league’s worst offense with the least number of runs scored and hit .234 as a team. Now, they are the best offensive team with the most runs scored, .275 average, and averaging 6.2 runs and nearly two homers a game. Their average exit velocity, which measures how hard the ball is hit, went from 88.16 mph in July to now 91.88 in September. They also have a league-leading .894 OPS in September, which is 50 points in front of second-place Baltimore. Michael Conforto, promoted in late July from the minors, has replaced John Mayberry and Juan Lagares, and his most striking statistic is his 150 wRC+ (weighted runs created). Catcher Travis d’Arnaud, since returning from the disabled list, has hit .303 with a 169 wRC+ since returning in late July and David Wright, who’s hit .275 since returning, have strengthened the Mets offense. While the Yankees acted dead at the deadline, the Mets got healthier and moved players around to maximize the potential of the team. Unlike the Yankees, they weren’t satisfied with the dominant pitching, they wanted to make the offense more powerful. Below, I’ll preview the pitching matchups of each game in this weekend’s series. 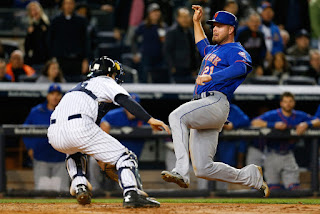 In Game 1, Steven Matz (3-0, 1.88 ERA) faces Masahiro Tanaka (12-6, 3.40 ERA), with the game beginning at 7:05 PM ET on the MLB Network. Steven Matz, a 24-year old rookie, made his major league debut earlier this year and has made two starts since coming off of the disabled list on September 6. He has not pitched deep into either game since as he has not gone past ninety pitches, but I expect him to go at least six innings against a streaky Yankees lineup. Plus, the Yankees seem to enjoy making inexperienced or recently-recovered pitchers (for example, Matt Moore) look like Cy Young winners. Matz features a 97+ mph fastball, curveball, and changeup. His ability to keep the Yankee batters off balance with his 12-6 curveball will determine his success this weekend. For the Yankees, Masahiro Tanaka, who pitched a 4-hit shutout at Citi Field last year, will start. Tanaka is coming off of two straight dominant outings, the last one being seven shutout innings against Toronto and the previous one an eight-inning effort where he allowed only one run against Baltimore. Tanaka is undoubtedly the number one starter, even if he is inconsistent - the entire Yankee rotation is inconsistent at the moment, and with Ivan Nova out of the rotation and Eovaldi injured, he is going to start the one-game Wild Card playoff if the Yankees end up there.

In Game 2, Noah Syndergaard (8-6, 3.20 ERA) faces Michael Pineda (10-8, 4.25 ERA). Syndergaard struggled a bit in August, but recovered to pitch seven dominant innings at Atlanta where he only allowed two hits and one earned run in seven innings. Syndergaard has been spectacular all year, especially in May where he pitched to a 2-2 record and a 1.82 ERA and in July where he pitched to a 2-1 record with a 1.32 ERA. Syndergaard has had a good month and a bad month after (May & June, July & August), so if the pattern holds, he’s going to have a dominant month in September. Like Matz, Syndergaard is a rookie who made his debut in May. He features primarily a fastball in the upper 90s, sinker in the 95 mph range, and a curveball. Both his fastball and curveball have limited hitters to below a .230 average all year. He is a right-handed pitcher so the Yankees will stack its entire lineup with lefties. Syndergaard has not faced the Yankees in his career so it will be interesting to see how he handles the spotlight, especially with the playoffs coming up. Michael Pineda has been shaky in September, making three starts and has registered a 1-0 record but with a 4.67 ERA. This is not going to work against the Mets simply because they have dominant pitching. The Yankees must be prepared to win 2-1 or 3-2 games and cannot rely on the long ball, especially at Citi Field, to come back from deficits and win. 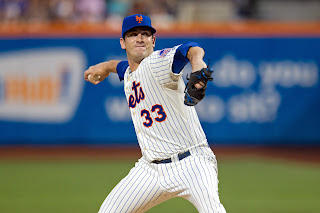 In a tale of young versus old, Harvey recently was involved in a controversy where his agent Scott Boras and him faced off against Mets management in an innings limit controversy, as Harvey is coming off of Tommy John surgery. As a precaution, he will pitch less than usual, but since the Mets are on track to at least the NLDS, Harvey needs to still pitch to maintain a routine. However, it has been reported that Harvey will not pitch more than five or six innings, so that could be a benefit to the Yankees. Much like Matz and Syndergaard, Harvey averages a 95+ mph fastball, a two-seamer at 96 mph, and a wicked hard slider at almost 90 miles an hour. Harvey, Syndergaard, and deGrom are considered the cream of the crop when it comes to MLB starting rotations. Harvey has not been sharp lately, as in his last start, he allowed eight hits and seven earned runs in just 5.1 innings. Luckily for Harvey, he’s going up against CC Sabathia, who, although in his last start pitched 6.2 shutout innings, is still not consistent. One day Sabathia can allow only one earned run in six innings, but the next time out he might allow five earned runs in five innings. This inconsistency prevents me from labeling Sabathia as even an average pitcher. Lately, Sabathia has also had a problem issuing free passes; he’s walked 17 batters in his last six starts. Sunday night is going to be a tale of young versus old, with both pitchers most likely exiting after six innings. It may come down to both bullpens, which is what I will cover next.

Jeurys Familia is the closer for the Mets, sporting a 1.63 ERA and 41 saves out of 46 opportunities. He blew three straight saves in the latter half of July but otherwise has been spectacular. He throws a 95+ mph sinker and 90 mph slider and will be used in the eighth or ninth inning. Other key relievers include Hansel Robles (49 games with a 3.42 ERA, 51 Ks in 47.1 innings) and Sean Gilmartin (44 games with a 2.89 ERA, 46 strikeouts in 46.2 innings). The Mets have not had a consistent one-two tandem like the Yankees have had. The Yankees, however, have not had extreme success with Justin Wilson and Chasen Shreve recently like they did earlier in the year. Betances and Miller have been dominant as of late, but concerns about over-usage has definitely flooded Joe Girardi’s mind, leading to a decrease of the Yankees’ most reliable relievers during close games. For some reason, Girardi believes using Nick Rumbelow, Branden Pinder, and Chris Martin will help us win games against division rivals. These inexperienced pitchers are simply not yet ready for the big games and moments yet. I trust only Betances and Miller, and even with those two on the mound, I get nervous in close games.

Here are the three players for each side to watch: Jeurys Familia
The Yankees need to win this weekend’s Subway Series. With Toronto continuing to win at a torrid pace, the Yankees have to keep pace if they want to win the division. Although the Yankees continue to lead the Wild Card standings, I’m not sure if the Yankees are ready for that one-game pressure. They will most likely face Cole Hamels and the Rangers, and even if the game is at Yankee Stadium, I don’t see a particular home-field advantage. The Yankees need to continue to aim for the division title because it’ll put them with the best shot of continuing deep into the playoffs.