By Unknown - September 25, 2015
The Yankees and White Sox opened up a 4-game series at Yankee Stadium, beginning the stretch toward the end of the regular season. After losing two of three to Toronto and essentially losing any chance of winning the American League East, the Yankees focused on locking down a playoff spot and home-field advantage in the one-game Wild Card playoff. Rob Refsnyder finally got his first start since being called up. Yankee legend Yogi Berra, who passed away earlier this week, was honored with a touching tribute prior to Thursday's game. Chris Sale (12-10, 3.47 ERA) faced off against Michael Pineda (11-8, 4.10 ERA), with the Yankees beginning Thursday's game 4 games in front of Houston in the Wild Card standings. 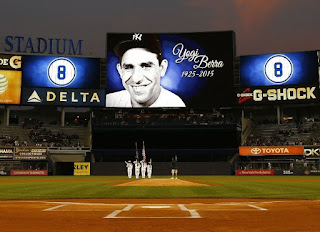 
Inning 1-3: The Yankees had men on first and second with two outs in the bottom of the first but Chris Young grounded out to shortstop to end the inning. In the top of the third, the White Sox loaded the bases with three singles. With two outs, Pineda faced early trouble. However, he struck out Trayce Thompson to end the inning. In the bottom of the third, the Yankees struck. With Alex Rodriguez on first and Chase Headley on second, Carlos Beltran hit a booming liner just over the wall in left field to give New York the 3-0 lead after three innings. 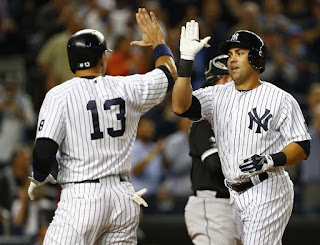 Innings 4-6: In the fifth, the White Sox had men on first and second with one out but neither Jose Abreu nor Melky Cabrera could come through. In the top of the sixth, Chicago cut into the lead as Trayce Thompson homered to left to make it a 3-1 game. The Yankees had men on first and second in the bottom of the sixth but both Dustin Ackley and then Rob Refsnyder struck out and the inning was over.

Inning 7: Justin Wilson relieved Pineda to start the seventh and trouble quickly ensued. With two outs, Wilson walked Adam Eaton and then Jose Abreu singled to put runners on the corners with two outs. Dellin Betances was summoned but walked both Melky Cabrera and Thompson to make it a 3-2 game! Betances struck out Adam LaRoche to end the inning but the tension in Yankee Stadium grew as the lead over the White Sox was trimmed to one.

Innings 8-9: The Yankees never threatened to score and extend its lead in this game. Betances handled the eighth without an issue and Andrew Miller came in for the save and the Yankees won 3-2.