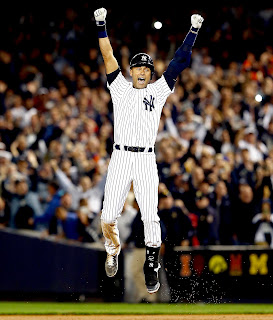 Just over one year has gone by and I remember it as if it was only yesterday. I was sitting in my dorm room and watching the game on my laptop with the lights turned off. It wasn’t the most comfortable experience for watching the game, but I wasn’t going to miss my favorite player of all time’s last home game for the world.

For most of the game, I thought I thought we had it in the bag, that is until David Robertson blew the save. At that moment in time I was pissed, but little did I know that it was all set up for a perfect ending. I had noticed that Jeter was going to get a chance to hit, but I thought it sounded too good to be true. But, then again, it was Derek Jeter. When he came up to bat with pinch runner Antoan Richardson (yes, I remember his name) at second, I had so good of a feeling I even starting recording the at bat for my Snapchat story. That night was one of the most magical nights for me and it was truly a blessing to be able to watch such an icon play while growing up.