By Unknown - September 01, 2015
With CC Sabathia on the disabled list, and hopefully gone for the rest of the season, Ivan Nova has officially supplanted him as the Yankees worst starting pitcher. I am writing this on the heels of last night’s demoralizing loss to the Red Sox so maybe it is a little unfair to scapegoat Nova. In no way, shape, or form am I blaming him for the loss in its entirety, however there is no questioning that he’s the weak link in this suddenly formidable starting rotation. Ivan Nova has been with the Yankees since 2010, and it’s apparent that he will never be able to overcome his inconsistencies. Some nights Nova will look very good and fool us into believing he can be a solid middle of the rotation arm, however we should know by now that he is capable of imploding at any time. What makes Nova’s struggles even more infuriating is that we have a pitcher who is a better option than him to start games rotting away in the bullpen. Poor Adam Warren. 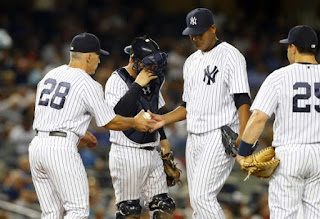 Nova’s career has been filled with ups and downs from the very beginning. After a brief sample size in 2010, he went 16-4 in 2011 with a 3.70 ERA. The next year he went 12-8 with a 5.02 ERA. Nova, much like Nathan Eovaldi this season, has historically been the beneficiary of a good amount of run support from the Yankees. In 2013 he went 9-6 with a 3.10 ERA before struggling in 2014 prior to his season ending Tommy John surgery. I could go further into detail with his advanced statistics, but that would make this article rather boring. The point I’m trying to make here is Ivan Nova has shown us time and again that he is just not that good. I was livid from day one when Joe Girardi demoted Adam Warren to the bullpen in favor of Nova and CC Sabathia. We all knew that due to CC’s track record, and colossal salary, the Yankees would never remove him from the rotation. That hesitancy is misguided, however there is at least a rationale behind it. I can’t figure out why the Yankees continue to believe in Ivan Nova, despite his blatant struggles. Unlike CC who helped lead this team to a championship, the organization owes Nova nothing.

At this point in the season, Nova is 5-7 with a 4.50 ERA. Throughout much of the season I fully anticipated the Yankees would lose every fifth day when CC Sabathia took the mound. That feeling has now officially returned whenever I see Ivan Nova as the probable starter. If it weren’t for Sabathia and Nova just imagine how many more wins the Yankees would have. Adam Warren is obviously the better option to start games, but for some reason neither Brian Cashman nor Joe Girardi comprehend this simple fact. To me, it seems like pure stubbornness, especially on Cashman’s part. Cashman’s disinclination to admit his mistakes is the only logical explanation for his continued faith in Chris Capuano, for example. Capuano was signed to a $5 million contract this offseason and has thus far been designated for assignment four times. He is currently in the minor leagues so I fully expect him to be back in the Bronx very soon with rosters expanding today.

As a starter, Adam Warren pitched very well, and got progressively better with more experience. I will admit that Warren is undoubtedly a weapon out of the bullpen, however he best serves this team in the rotation. The bullpen is already the biggest strength of the team with four dominant relievers: Justin Wilson, Chasen Shreve, Dellin Betances, and Andrew Miller. Hopefully with the rosters expanding the Yankees can find one more reliever they can place trust in. Perhaps Andrew Bailey can be that guy, considering he was once a dominant closer before the injury bug bit. Last night after giving up two home runs early, Nova settled down well, however that is more so the exception rather than the rule. As we saw in last week’s 15-1 beat down the Yankees suffered at the hands of the Astros, Nova has struggled limiting the damage. With Ivan Nova, you can tell very early on whether or not he will be effective on a given night. Unfortunately, this season Nova has been ineffective more than he has been effective and it is costing the Yankees games.

I may be looking too far ahead, but the Yankees will have an influx of starting pitchers to deal with this offseason. With Masahiro Tanaka, Michael Pineda, Nathan Eovaldi, Luis Severino, CC Sabathia, Ivan Nova, and Adam Warren on the roster they will have to make some tough decisions. I have a feeling that the Yankees will trade Nova this offseason, perhaps for a second baseman. They floated his name around at the deadline in a possible trade with the Reds for Brandon Phillips, but that fell through. Either way, I hope the Yankees do not tender Nova a contract. I know he provides depth, but the Yankees need to come to the realization that Nova is not that good of starting pitcher. Each pitcher named above, with the exception of Sabathia, is a better option than Nova to start games for this team.

Some fans need to wake up. We are in the middle of a pennant race. From this point on, every game counts. The Blue Jays are clicking on all cylinders, and have shown no signs of slowing down. On the rare occasion that the Blue Jays do lose, it is imperative that the Yankees seize the opportunity and make up some ground in the division. As it stands, the Yanks are only 1.5 games out of first place, with a comfortable 4 game lead for the first wild card. Due to this team’s offensive inconsistencies, it is very hard for me to trust them in a one game playoff. This makes it all the more important that we win the division. As long as we stay within two games of the Blue Jays before the four game showdown with them in the Bronx next weekend, we will be in good condition. We’ve seen Nova implode many times this season, and I fear he will do it once again as the games become more and more meaningful. The Yankees will not do it, but the team would be better served with Adam Warren as a member of the rotation come crunch time. Even though it was a small sample size, I trust Warren starting in the playoffs far more than Pineda, Nova, or Sabathia at this point.