By Unknown - September 12, 2015
I haven’t written a rant in about a month, but after today’s disgraceful showing against the Toronto Blue Jays in the middle of pennant race I felt I was obliged to share my frustrations. This Yankees team has rolled over, and essentially surrendered any hopes of winning this division. I’ve had this four game series with Toronto circled on my calendar for two months because I knew this would be the most important series for the Yankees since the 2012 ALCS. Guess what? The Yankees failed miserably. After getting slaughtered by Toronto on Friday night, they went into Saturday’s double-header with hopes of winning at least one game, but this sorry bunch doesn’t even seem capable of as much. For those of you who haven’t read it yet, I predicted this collapse a while back after our general manager failed to improve our deeply flawed roster at the trade deadline CLICK HERE. I have tickets for Sunday’s game, and I must admit I am very apathetic towards going. In fact, if Alex Rodriguez weren’t being honored for his 3000th hit I may have sold the tickets already. 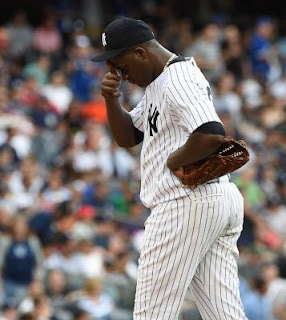 I feel as if I’m obligated to begin my frustrations with the incompetent manager: Joe Girardi. Let’s examine some of the horrific decisions he made in Game 1 of Saturday’s double-header. In the bottom of the eighth, after Alex Rodriguez walked, knowing he may very well have needed his bat later in the game, Girardi opted to pinch run Joe Pirela although he very much knew that run was virtually meaningless. In the bottom of the 10th, with a runner on second and two outs the game was in the hands of Cashman’s big deadline move, Dustin Ackley, who predictably didn’t come through. I’m not saying A-Rod would have won us the game, but I would have felt very much more comfortable with him at the plate as opposed to Ackley. At first I thought he took A-Rod out to rest him for the second game, but nope he was on the bench for game two. In the disastrous top of the 11th, after Bryan Mitchell walked the bases loaded and struck out Dioner Navarro, Girardi opted to bring in a struggling Chasen Shreve, who predictably lost us the game. Some may say this dissection is purely anecdotal, but I believe this one example can be applied to many games this season. Joe Girardi has cost this team games. The Yankees have missed the playoffs for two straight seasons, and unless they right the ship very soon, they could be very well on their way to missing it three seasons in a row. This is not to mention they led the division by seven games in July. There has to be a level of accountability, and in my eyes Girardi is a part of the problem, not the solution.

This team is lifeless, and it’s really difficult to watch. Very obvious flaws that weren’t addressed at the deadline are haunting us. The Mets, Royals, Rangers, and Blue Jays significantly upgraded their rosters at the trade deadline, and they are gleefully reaping in the results, as all of those teams are poised for postseason runs. The Yankees stood pat, and are currently in all out collapse mode. The Yankees are feeling the consequences of their decision to not go after a starter. They opted to count on Luis Severino, a kid only a year older than me, to lead them to the promise land. Although Severino is a great talent, it was very obvious he would go through growing pains, as he did against the Jays on Friday night. Considering our starters are struggling to even last five innings, the rotation is a problem. David Price certainly would have solved this issue. After a streak of five amazing games, Stephen Drew sucks again. Wouldn’t Martin Prado have been nice? Aside from Betances and Miller, who have both been overworked, the Yankees don’t have one reliever I feel confident about. Craig Kimbrel would have been a great addition. Our general manager and owner decided to stand pat, and as a result they cost our beloved Yankees a chance at a World Series. I understand many fans wanted to hold on to the youth for once, but you don’t turn down an opportunity to win a World Series. You just don’t. Period.

Now I must go after the players on the field. Jacoby Ellsbury and Brett Gardner have been lifeless of late. In Game 1 of the double-header, with Ellsbury on second and Gardner on first, Gardner could not move up on a past ball. Had Gardner made it second he surely would have scored on Brian McCann’s RBI single giving the Yankees a 6-5 victory. He is the worst fast runner I’ve ever seen, and it is extremely frustrating to watch. The Yankees refusal to play small ball, which in my opinion starts with the manager, is another weakness. Players all too often swing for the fences instead of settling for productive outs. Chase Headley, Didi Gregorius, and Stephen Drew are the guiltiest offenders. Mark Teixeira’s loss is obviously a huge one, but Greg Bird has filled in admirably. Currently, in my eyes, the only offensive players doing their jobs are Alex Rodriguez, Brian McCann, and Carlos Beltran.
A rotation with CC Sabathia, Michael Pineda, and Ivan Nova is laughable at this point. By the way, after he imploded in Game 2 of the double-header wouldn’t it have made sense for Girardi to just leave him out there to alleviate stress of the bullpen and eat up innings? Nope, Girardi didn’t even let him finish the second inning. Maybe Girardi finally realized Nova is terrible. If so, it’s too little too late. Nonetheless, all three of these starters are complete wild cards and undependable. Masahiro Tanaka and Luis Severino are the only two that can be counted upon to pitch well on a consistent basis, and I’m being generous with this assessment. Considering I have already given up all hope on winning the division, we must look towards the Wild Card. I don’t trust this team in a one game playoff whatsoever. Even if the Yankees do end up playing at home, there is no home field advantage to this new Yankee Stadium at all, as the Blue Jays have proved to us this season.

Watching this team surrender a 7 game lead has been infuriating, and watching them roll over without a fight in the middle of a pennant race is an absolute disgrace. Derek Jeter would never let his team seemingly give up in this manner. It is time for someone to step up and knock some sense into this bunch because I have a feeling they may not even make it to the Wild Card game. When the team was soaring high in late June/early July I made a bold prediction that many attacked me for. I stated the Yankees would never win another championship, let alone make the playoffs, under the leadership of Brian Cashman and Joe Girardi. On September 12th, I stand by that assertion. The Yankees seem to be an organization that doesn’t hold people accountable, and I find that concerning. Brian Cashman has won one championship in fifteen years. Joe Girardi’s Yankees have missed the playoffs for consecutive seasons for the first time in twenty years. If the Yankees don’t miraculously put it together, I expect an overhaul this offseason, starting with the two names stated above.