By Unknown - September 16, 2015
The Yankees and Rays faced off in a three-game set, which started Monday at Tropicana Field. The Yankees came in after losing three out of four against the Blue Jays at home and were struggling with their pitching. CC Sabathia, Adam Warren, and Luis Severino started in that order against the Rays. In Game 1, Slade Heathcott played hero as his tie-breaking 3-run home run in the 9th gave New York the win. The Rays's consistent offense on Tuesday gave them a 6-3 win; however, in Game 3, the Yankees capitalized on Greg Bird's 2 RBIs and another solid outing by Severino and the bullpen to win the series. 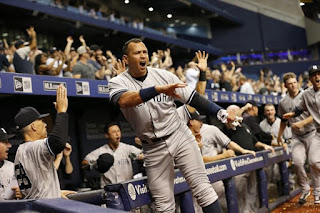 Game 1 (Monday, September 14) - New York Yankees 4 @ Tampa Bay Rays 1
Both Erasmo Ramirez of Tampa Bay and the Yankees’ CC Sabathia pitched very well on Monday night. Erasmo Ramirez walked two but had a no-hitter through seven complete innings before giving up a hit to Carlos Beltran to start off the eighth. Sabathia got himself out of a bases-loaded, one out jam in the second but otherwise pitched very well; he only allowed three hits, struck out six, and walked two in 6.2 innings. In the top of the seventh, the Yankees had Brett Gardner on second with one out but Brian McCann’s line out to right was caught at the wall by Mahtook, who then threw to second to double off Gardner, who took off on the pitch. Unbelievable! The Yankees were also unable to cash in when Didi Gregorius struck out with Rico Noel on third in the eighth. With Justin Wilson pitching and two outs, the Rays finally struck on a Logan Forsythe double that scored Mahtook all the way from first to give the Rays a 1-0 lead. The Yankees were down to their final out in the ninth against Rays closer Brad Boxberger but Gardner walked, stole second, and then on the 1-1 pitch A-ROD DOUBLED into right center and the game was tied at 1! After McCann was intentionally walked, Slade Heathcott came to the plate with the go-ahead run on second and on the first pitch HE SWUNG AND SENT THE BALL INTO LEFT AND IT WAS GONE! Heathcott HOMERED TO LEFT and gave the Yankees the lead at 4-1. 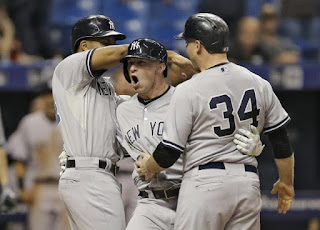 What a moment for Slade Heathcott! Andrew Miller came in in the bottom of the ninth and struck out the side to earn the save and the Yankees won 4-1.

Game 2 (Tuesday, September 15) - New York Yankees 3 @ Tampa Bay Rays 6
Although Alex Rodriguez was rumored to be injured prior to Tuesday’s game, he started the scoring for the Yankees by homering to right to give New York the 1-0 lead. However, Adam Warren, who made the start on Tuesday, gave up four straight hits, the last one culminating in a Logan Forsythe RBI single. Mahtook scored on a Brian McCann scoring error after reaching on a double that bounced past Chase Headley at third. However, Greg Bird gave the Yankees the lead back and the 3-2 lead with his home run to center in the fourth. In the fifth, the Yankees had runners on first and second with none out when after Ellsbury bunted, Brett Gardner’s grounder to the pitcher caused Didi Gregorius to be out at home and the inning ended without a run being scored. Nick Rumbelow came in for James Pazos in the fifth with runners on the corners and one out and struck out Steven Souza Jr. and Evan Longoria to end the threat. Rumbelow’s good fortune did not last long as Nick Franklin homered in the sixth with Logan Forsythe on and the Rays took back the lead, 4-3. With Joe Girardi bringing in relievers that weren’t tested (for example, Mitchell and Pinder) JP Arencibia’s 2-RBI single made it 6-3 in the eighth inning. Brandon Gomes came in for the ninth and finished off the Yankees without an issue and the Rays won 6-3.

Game 3 (Wednesday, September 16) - New York Yankees 3 @ Tampa Bay Rays 1
Greg Bird got the scoring started on a RBI double to right center to give the Yankees the 1-0 lead. The Yankees doubled their lead to 2-0 in the top of the sixth when Chase Headley’s bloop single scored Brian McCann from second. Luis Severino pitched well, going 5.2 innings before Justin Wilson came in to finish the sixth inning. However, he allowed a RBI double to Steven Souza Jr. and the Rays cut their deficit to 2-1. Dellin Betances came in with two outs in the seventh but promptly walked three straight batters to load the bases with two outs. He recovered and struck out James Loney on three pitches to escape the jam. Betances also pitched the eighth and a bunt double play helped him get out of the inning. Greg Bird’s timely solo home run in the ninth made it 3-1 and gave the Yankees an insurance run. Andrew Miller struck out the side for the save and the Yankees won 3-1.

Looking Forward
The Yankees will head into Flushing Meadows to face the New York Mets in the second part of the Subway Series. Even though the Mets aren’t a division rival, they are a team with excellent pitching and the Yankees must perform well if they are to continue their chase of Toronto in the American League East or to secure home-field for the one-game Wild Card playoff. The probable pitchers for this series: