By Unknown - September 14, 2015
The Yankees and the Blue Jays faced off in a critical 4-game set in the past weekend in the Bronx. The Blue Jays pounced on the Yankees with its loaded offense to win the first three games of the series, including sweeping the single-admission doubleheader on Saturday. This led to many fans leaving the ballpark and the stadium being very empty for Saturday night's game. Toronto scored nine or more runs in Games 1-3 and knocked out the Yankee pitchers early. This led to an overused bullpen, and if not for expanded rosters, we would have seen more than one position player take the mound for New York. However, the Yankees salvaged Game 4 with a gem from Masahiro Tanaka, but by then they had lost three games to the Jays in the American League East and now trail Toronto by 3.5 games with just three weeks to go in the regular season. 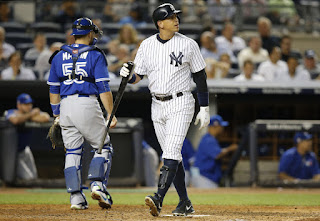 Game 1 (Friday, September 11) - Toronto Blue Jays 11 @ New York Yankees 5
Thursday’s Game 1 was postponed due to rain in the Bronx, but the same pitchers faced off in Friday’s game: David Price (14-5, 2.43 ERA) and Luis Severino (3-2, 2.04 ERA). The Blue Jays pretty much put the game out of reach in the first inning. Josh Donaldson and Justin Smoak both hit 2-run home runs in the first inning off of Severino and the Jays led 5-0 after one. The teams would exchange scoring runs each in each frame of the third and fourth inning. Russell Martin’s RBI single complemented Edwin Encarnacion’s home run. Brett Gardner’s sacrifice fly complemented Didi Gregorius’s RBI single, but still, no deficit was made up. The Yankees made it interesting in the bottom of the sixth when Didi Gregorius hit a 3-run home run off of LaTroy Hawkins, who came in for Price in the sixth. However, Russell Martin and the Toronto offense would not go away. Martin’s 2-run home run off of Chasen Shreve put the game away for good as they led 11-5 after seven innings.  Every member of the Toronto offense had two or more hits except Ryan Goins and Kevin Pillar. The Yankees had to use five relief pitchers the day before a single-admission doubleheader, which was a major issue. Lastly, the Yankees actually went 3-5 with RISP, so when the Yankees had men to score, they did it - Toronto’s potent was just too much. They registered seven extra base hits with five being home runs tonight.

Game 2 (Saturday, September 12 - Game 1 of doubleheader) - Toronto Blue Jays 9 @ New York Yankees 5 (F/11)
Game 1 of the single-admission doubleheader on Saturday started at 1:05 PM in the Bronx. Ivan Nova faced off against Marco Estrada. Brett Gardner got the scoring started with a home run to right in the bottom of the first to put New York ahead 1-0. The Yankees doubled their lead to 2-0 on a Chase Headley home run in the second. Troy Tulowitzki left the game in the second after a collision which must have hurt his back.The Blue Jays made it 2-1 on a Jose Bautista home run in the fourth but Alex Rodriguez’s 2-run HR to left made it 4-1 after four innings. However, Ben Revere’s home run and Edwin Encarnacion’s 2-run HR to left in the fifth made it a tie game at 4. Then, Toronto pounced and Jose Bautista hit a home run to dead center off of Dellin Betances in the top of the eighth to make it 5-4 Toronto. The Yankees were in danger of losing but Brian McCann came through with runners on the corners with one out by singling home Ellsbury. It was a 5-5 game and remained that way until the game entered extra innings. Andrew Miller pitched a scoreless ninth and tenth to keep the game going. In the bottom of the tenth, the Yankees had a chance to win with the speedy Rico Noel on second and Dustin Ackley at the plate. However, he grounded out to second and the game continued.

In the eleventh, Bryan Mitchell came in. The Blue Jays had men on first and second with none out when Chris Colabello walked now to load the bases. After Dioner Navarro struck out, Russell Martin walked (RBI). Kevin Pillar struck out but Ben Revere singled (RBI), Josh Donaldson walked (RBI), and Jose Bautista walked (RBI). SIX WALKS in one inning and the Blue Jays took a 9-5 lead. Toronto went on to win 9-5.

Game 3 (Saturday, September 12 - Game 2 of doubleheader) - Toronto Blue Jays 10 @ New York Yankees 7
The second game of the doubleheader started around 6:15 PM ET. Marcus Stroman made his season debut (0-0, 0.00 ERA) against Ivan Nova (6-7, 4.50 ERA). In the second inning, the game went horribly wrong. Ryan Goins’ RBI single followed by Cliff Pennington’s home run made it 3-0. Then, Jose Bautista and Russell Martin added run-scoring doubles of their own and it was 6-0. Nick Rumbelow came in to finish the inning; eventually Chris Capuano entered in the fourth. No scoring occurred until the fifth. In the fifth, Brett Gardner, with Gregorius and Ryan on, homered to right to make it 6-3. Didi’s RBI single made it 6-4 but Toronto, facing Capuano and Branden Pinder, who relieved him in the seventh, crushed all hopes of a comeback basically by scoring four runs in the seventh. Ben Revere’s infield single with the bases loaded scored two and made it 8-4, Josh Donaldson’s single off of the right field wall made it 9-4, and then Jose Bautista’s single to center made it 10-4. The Yankees didn’t give up just yet though. With Yankee Stadium literally empty except a few Toronto fans, Brett Gardner hit his SECOND three-run home run in the eighth to cut it to 10-7 off of Jeff Francis. With Steve Delabar in, Carlos Beltran singled and reached second on a passed ball, Brian McCann came up but struck out with a runner in scoring position (#RISP) to end the eighth. Mark Lowe came in for the save and set the Yankees down in order. The Blue Jays won 10-7.

Game 4 (Sunday, September 13) - Toronto Blue Jays 0 @ New York Yankees 5
The Yankees needed a big outing from Masahiro Tanaka (11-6, 3.60 ERA) today against RA Dickey (10-10, 4.06 ERA) of the Blue Jays, who were going for the sweep of the Yankees. The Yankees struck first as they loaded the bases in the bottom of the second with none out and Dustin Ackley and Didi Gregorius hit consecutive sacrifice flies to make it 2-0. Ackley then added a 2-out, 2-run home run off of Dickey in the fourth to make it 4-0. Tanaka pitched seven shutout innings, struck out seven, and allowed only four hits. Dellin Betances came in for the eighth and struck out the side. Alex Rodriguez, who was honored for his 3000th hit before the game, doubled home Rico Noel to make it 5-0 in the eighth. James Pazos and Caleb Cotham combined to finish the ninth and give the Yankees the win.