By Unknown - September 19, 2015
After losing Game 1 on Friday night due to a terrible offense and poor bullpen management by manager Joe Girardi, the Yankees headed into today's game 4.5 games back from the Blue Jays in the AL East. The Yankees really needed to win today's game as they cannot lose any more ground if they hope to win the division and avoid the one-game playoff. In a day game at Citi Field, Michael Pineda faced off against Noah Syndergaard. 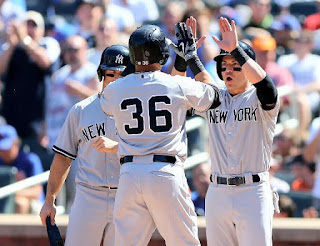 In the first inning, the Yankees wasted no time getting started. After Ellsbury and Gardner reached on consecutive singles, Carlos Beltran sent Noah Syndergaard's pitch over the right field wall to give the Yankees a 3-0 lead on his first-inning, 3-run home run. Both Pineda and Syndergaard pitched very well as they limited baserunners through the first four innings. Dustin Ackley led off the fifth with a triple but Syndergaard struck out Didi Gregorius and Michael Pineda before getting Ellsbury to ground out to end the inning. After Beltran walked with one out in the sixth, Brian McCann homered to right center to give the Yankees a 5-0 lead! After Pineda struck out Yoenis Cespedes with men on first and second and none out in the sixth, Justin Wilson came in. After Wilson walked David Murphy, he struck out David Wright and then Juan Uribe on three pitches. He also struck out Wilmer Flores and Juan Lagares before departing so he struck out all four batters he faced. The Yankees led 5-0 after seven innings. In the ninth, Andrew Miller had to come in (with a 5-0 lead, I don't know why) with runners on first and second and two outs and recorded the final out to give the Yankees the 5-0 win on Saturday afternoon.