By Unknown - September 24, 2015
After hearing of the passing of Yankee all-time great Yogi Berra, the Yanks looked to honor Yogi with a series win on Wednesday night in Toronto. In their last head to head matchup of the season with the division leading Blue Jays, the Yankees would send Ivan Nova to the mound in place of Masahiro Tanaka who is nursing a hamstring injury. Despite a solid spot start from Nova, the Yankees offense was completely shut down by young Blue Jays pitcher Marcus Stroman. Any hopes of a first place finish are slowly dwindling, thanks to an inconsistent Yankee lineup. 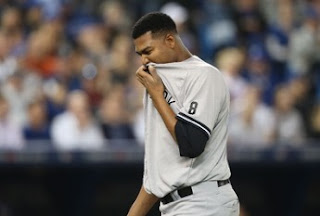 Innings 1-3: Blue Jays Marcus Stroman, who tore his ACL only 6 months ago, took the mound for his third start of the season. In the top of the 1st, Stroman struck out Jacoby Ellsbury and Brett Gardner to start the game before retiring A-Rod on a soft groundout. Ivan Nova took the mound for the Yankees in the home half of the 1st inning. He allowed Josh Donaldson to reach on an infield single and Edwin Encarnacion continued his hot streak with a double to left field putting runners at second and third base with two outs. Nova got out of the early jam with a strike out of Justin Smoak. Stroman again retired the Yankees 1-2-3 in the 2nd inning while Ivan Nova allowed two more base runners in the inning without allowing a run. In the 3rd inning, Didi Gregorius recorded the Yankees first hit of the game with a base hit to center field, but he never advanced past first base.

Innings 4-6: Both pitchers breezed through the 4th inning before Greg Bird, last night’s hero, led off the inning with a single. Chase Headley continued his struggles at the plate with a 3-6-3 double play. Dustin Ackley hit next and doubled, giving the Yankees their first base runner to reach second base. Marcus Stroman then retired Didi Gregorius to end the Yankee 5th. In the bottom half of the inning, Ivan Nova pitched a spotless frame retiring the Ben Revere, Josh Donaldson, and Jose Bautista in order. New York didn’t fare much better in the top of the 6th inning as they were sent down in order. In the bottom of the inning, Nova recorded two quick outs before walking Blue Jays catcher Russell Martin. With Ivan Nova at 110 pitches, Manager Joe Girardi opted for the lefty on lefty matchup bringing in James Pazos to face Blue Jays shortstop Ryan Goins. Ryan singled to center advancing Russell Martin to third, putting runners on the corners with two outs in the inning. After facing just one batter, Girardi brought in rookie RHP Caleb Cotham to face Blue Jays CF Kevin Pillar. Cotham gave up a base hit, giving the Blue Jays a 1-0 lead. The Jays loaded the bases with two outs before Ben Revere flew out to end the inning.

Innings 7-9: In the 7th inning, Carlos Beltran reached on a walk and Chase Headley laced a two out single to put the tying run on second base. The Yankees lone deadline acquisition Dustin Ackley laced a line drive to centerfield, but it was run down by Pillar to preserve the Jays 1-0 lead. In the bottom of the 7th Andrew Bailey came in to pitch for the Yankees. Josh Donaldson led the inning off with a double before Bailey intentionally walked Edwin Encarnacion. With two outs and two on, Russell Martin made his former team pay by hitting his 21st home run of the season to break the game wide open at 4-0. In the Yankee half of the 8th inning, Brett Cecil came in for the Blue Jays and worked an efficient shutout inning throwing only 9 pitches, 8 of which were for strikes. Yankees RHP Bryan Mitchell worked a rare three up, three down inning, lowering his season ERA to 5.81. In the top of the 9th with the Yankees looking to stage a comeback, they received a leadoff double from Alex Rodriguez before Brian McCann, Slade Heathcott, and Greg Bird were all set down in order by Blue Jays closer Roberto Osuna. Alex Rodriguez was the only Yankee to reach third base the entire game, a prime example of how lackluster the New York offense was the entire night.