By Unknown - September 23, 2015
After losing Game 1 of the series on Monday night to Toronto’s Ace and AL Cy Young favorite David Price, the Yankees found themselves once again in a must win situation. Going into Tuesday’s matchup, the Yankees had lost 12 of 17 games against the division leading Blue Jays this season. With just over a week left in September, each game becomes more important than the last. After failing to capitalize in game one, the Yankees received a much needed win on Tuesday evening, thanks to a complete team effort. 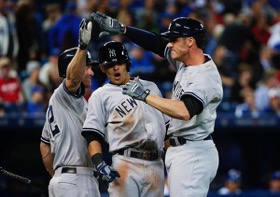 Innings 1-3: In the first inning, the Yankees got on the board early after a leadoff double from Jacoby Ellsbury. A-Rod worked a walk to put runners on the corners with one out. Brian McCann got the Yankees on the board with a base hit to right, followed by a sacrifice fly from Carlos Beltran to put the Yanks up 2-0 early. Severino had a three up, three down inning in the first and both pitchers breezed through the second inning. In the bottom of the 3rd, Blue Jays CF Kevin Pillar hit a 96 MPH fastball from Yankees rookie starting pitcher Luis Severino over the left field fence to pull the Jays within one.

Innings 4-6: The Yankees went down quietly in the top of the 4th inning before the Blue Jays tied the game on Justin Smoak’s RBI single to right field, scoring Josh Donaldson. Both Estrada and Severino settled into grooves and kept the game tied at 2 through six innings.

7th Inning: Estrada took the mound in the top of the 7th and quickly retired Chase Headley before walking Dustin Ackley. Didi Gregorius lined a single to right fielder Jose Bautista, who threw a bullet to cut down Dustin Ackley trying to advance from first to third on the single. Ackley was initially called safe, but the Jays challenged the call and it was overturned. Estrada stayed in the game to intentionally walk Jacoby Ellsbury before being replaced for LHP Aaron Loup to take on the left handed hitting Brett Gardner. Gardy came through with an infield single to Ryan Goins to load the bases with two outs. After facing only one batter, Loup was replaced with RHP Liam Hendriks to face Alex Rodriguez in a crucial situation. It took Hendriks all of three pitches to strike out Alex Rodriguez to end the threat in the seventh inning. Yankees LHP Justin Wilson came in to pitch the bottom of the 7th where he worked a 1-2-3 inning on just 7 pitches, 6 of which were for strikes.

8th Inning: With one out in the Yankees top half of the 8th, Carlos Beltran hit his 17th home run of the season over the right field fence to give the Yankees a 3-2 lead. In the bottom of the 8th, manager Joe Girardi called to the bullpen for 6’8” set up man Dellin Betances. Betances made things interesting as he loaded the bases with two outs before striking out Edwin Encarnacion on a 2-2 slider to end the Blue Jays threat.

9th Inning: In the top of the 9th, the Yankees looked to pad their lead on the road in a hostile Toronto environment. Chris Young drew a leadoff walk in his only at bat of the game after coming in as a defensive replacement in the 8th inning. Didi Gregorius tallied his second hit of the night with a ground rule double. Yankees leadoff hitter Jacoby Ellsbury followed with a fly out to Blue Jays RF Jose Bautista who doubled up Chris Young at the plate with a perfect throw, recording his second assist of the night. The Yankees failed to capitalize with runners in scoring position in the 8th, something that Yankees fans have grown accustom to of late. In the home half of the 9th inning, the Yankees brought in Andrew Miller in hopes of bringing the Yankees within 2.5 games of the Blue Jays in the AL East. After striking out Justin Smoak to begin the inning, Andrew Miller left a first pitch fastball over the heart of the plate in which Dioner Navarro hit into the left field bleachers to tie the game and give the Blue Jays new life.  Miller went on to load the bases before striking out the AL MVP favorite Josh Donaldson to end the threat and send the game into extra innings.

10th Inning: The top of the 10th inning began in a very bizarre way. Brian McCann uncharacteristically bunted against the Blue Jays shift for an infield single before being lifted for a pinch runner in the name of Rico Noel. Slade Heathcott pinch hit for the Yankees and reached first on a catcher’s interference call on Blue Jays Dioner Navarro to place Yankees base runners on first and second with nobody out in the inning. Yankees rookie first basemen Greg Bird  then delivered the biggest hit of his early career by stroking a 3-run home run to give the Yankees a huge 6-3 lead. In the bottom of the 10th inning, Joe Girardi sent Andrew Miller out for his second inning of work despite throwing nearly 30 pitches in the previous inning. After retiring Bautista to begin the inning, Edwin Encarnacion hit his 35th home run of the season to pull the Jays within 6-4. Miller finished off the next two batters, earning his 3rd win of the season to pull the Yankees within 2.5 games of the division lead heading into tomorrow’s season finale between the two clubs.