By Unknown - October 05, 2015
There’s a lot to say about the two teams but it’s a busy week, I’ve got midterms and quizzes, so let’s keep this short. After losing six out of their last seven games, the New York Yankees snuck into the playoffs and captured the first Wild Card position to host the Houston Astros. The Yankees have Paul Goldschmidt to thank, as he hit the tiebreaking 2-run home run to left in the bottom of the 7th that was the difference to sending Houston to New York and not the other way around. Had the Yankees and Astros tied in the Wild Card, New York would have had to travel to Houston for the playoff. Let’s take a look at each team. 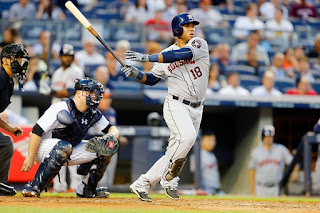 The Astros made the obvious announcement over the weekend that their ace, Dallas Keuchel (20-8, 2.48 ERA), a front-runner for the Cy Young, will make the start on Tuesday. 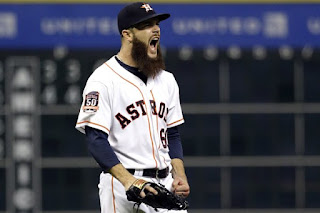 This was expected even though Keuchel pitched on Friday night against the Diamondbacks and threw 100 pitches; this will also be the first time in his career that he has pitched on three days’ rest. On the season, Dallas Keuchel has thrown 232 IP, struck out 216, with a 1.02 WHIP. Additionally, Keuchel has dominated the Yankees this year. In his two outings, one at New York and one at Houston, he’s pitched 16.0 IP and allowed 9 hits, one walk, 21 strikeouts, and no earned runs. None at all! In his first outing on June 25 in Houston, his 116-pitch and 6-hit shutout of the Yankees turned many heads. No Yankee runner reached second base until the ninth inning! Unbelievable. At one point from the fifth to ninth innings, he set down fifteen Yankees in a row. In that game, Chris Young and Carlos Beltran had two hits each, so expect those two in the lineup on Tuesday. In his second outing at Yankee Stadium on August 25, the Astros destroyed the Yankees 15-1 and Keuchel pitched 7 innings of 3-hit ball with nine strikeouts. He only threw 88 pitches as well, so I’m sure he could’ve shut out the Yankees a second straight time if he wanted. In that game, regulars Jacoby Ellsbury and Carlos Beltran had the only hits against Keuchel. Put simply, Beltran is the only Yankee hitter who has had success against Keuchel, going 3-6 off of him this year. In his first ever outing against the Yankees in 2014, he pitched 8.0 IP, allowing three earned runs, striking out six, and allowing seven hits. Still a very good and efficient outing, having thrown only 96 pitches - it also counted as a complete game as the Yankees won that game 3-0. What you should take out of this is that Keuchel has absolutely dominated the Yankees in his career and Tuesday will be no different, considering how the Yankees have struggled offensively, which I will discuss shortly. 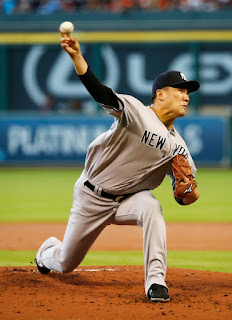 Tanaka has pitched well recently to a 2-1 record in September with a 3.06 ERA. However, home runs continue to be a problem for him, as he’s given up 5 this month and 25 this year. In his lone outing at Houston this year in late June, he was hammered for six earned runs, seven hits, and two walks, and three home runs in 5.0 IP. Chris Carter, Jose Altuve, and Carlos Correa hit home runs against Tanaka in the game. It’s also a game where Tanaka gave up a 6-0 lead by the fifth inning after being handed one by the Yankees in the second inning. So there you go. The Houston offense is powerful and will not hesitate to hit Tanaka out of the game real early.

It’s easy to see that the Yankee offense has struggled with runners in scoring position recently, and I’ve ranted about the offense enough so I will skip over that for now. In terms of the Houston offense, they have hit over .305 in the their last seven days. Seven Astros players have hit 15 or more home runs this year, and at any time, are a legitimate power threat. Jose Altuve and Carlos Correa, batting .313 and .279 respectively, lead the Astros offense. Additionally, Altuve is a threat to run, with 38 stolen bases this year. The team, as a whole, has only hit .250 this year, but honestly, with Keuchel on the mound, they won’t be needing much offense to win. Against the Yankees this season, Evan Gattis is 11-for-26 (.423), with three home runs and 10 RBIs. The Astros bullpen is average, with Will Harris, Luke Gregerson, and Pat Neshek usually pitching the late innings. If it comes down to a close game, I expect Keuchel to throw as much as he can with the season on the line, perhaps even into the 110+ pitch count so long as he is dominating the Yankees.

If you want a prediction, here we go. I’ll be the first to say that, realistically, I believe the Houston Astros will come into the Bronx and dominate the New York Yankees. The Yankees could not win more than one game against the lowly Boston Red Sox and Baltimore Orioles over the last week of the regular season against mediocre starters, so that does not help my opinion of the Yankees’ chances this week. In addition, the Yankees are without a star hitter in Mark Teixeira. Additionally, the Yankee bullpen is struggling as well - Dellin Betances and Andrew Miller have been off recently so nothing is automatic in the bullpen anymore! Chasen Shreve is not a viable option and Justin Wilson is hittable now as well. This becomes a major problem especially if the Yankees have a 1-run game and must go to the bullpen early on tomorrow night. The Astros may not have a solid bullpen as well, but with Keuchel throwing, they may not need the pen at all. I just don’t see the Yankee offense having enough success against Keuchel. The Astros will hit at least one, if not two home runs off of Tanaka and will likely take an early lead and hold onto it.

I usually avoid making a score prediction but we’re probably looking at a Houston 3-1 win. Tanaka will do enough to keep the Yankees in the game but I do not see the New York offense doing much at all. If the Yankee offense ends on Tuesday night, there will be many people to blame, but most of all, Joe Girardi, for his personnel decisions that cost the Yankees somewhere between five and ten wins. Of course, I would love for the Yankees to win, but as I’ve heard many times now, they might be the worst team in the playoffs. I know people usually say that there’s a fresh start as soon as the postseason starts, but this Yankee team has shown me absolutely no energy and no passion so I will not believe that adage for this team until I see something that proves me wrong. The Yankees will need its veterans and best hitters to step up, which include Alex Rodriguez, Brian McCann, and Jacoby Ellsbury. Brett Gardner needs to get on base and Chase Headley, and I have very low expectations of him now, just please don’t spike the ball into first base like he always does. Go Yankees and I hope they can somehow miraculously move onto the ALDS in Kansas City.