What to do with Jacoby Ellsbury


In December of 2013 Jacoby Ellsbury and the Yankees agreed on a 7 year, $153 million contract. Yankee fans were ecstatic when they heard the news thinking they got themselves an above .300 hitter with 30 stolen bases a year when really it has been almost completely opposite of that. 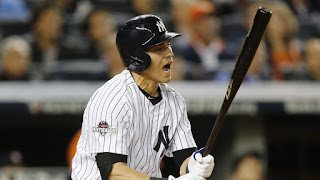 He was in a new city after all; with the team that just the year before was his rival. New surroundings can be tough. After the 2015 season with the New York Yankees, which he hit .257, a career worst for him, this does not seem to be the case.

Ellsbury started the season off scorching hot until he was injured in May. After the injury, Ellsbury was arguably the worst hitter on the team, which is saying a lot with Brett Gardner as bad as he was after the All Star break and Stephen Drew barely breaking the .200 mark. After Jacoby Ellsbury returned from his injury, he hit .230 in July, August, and September combined. These months were also when the Yankees blew their 7 game lead in the AL East. I don’t think this is a coincidence.

Was Jacoby Ellsbury the only problem? Of course not. Just about the entire Yankees roster had an awful second half of the season. The offense was nowhere to be found in many games, and when the Yankees did get hot, it was only for a few games. The Toronto Blue Jays also acquired Troy Tulowitzki and David Price at the trade deadline and they have been practically unbeatable since then. Jacoby Ellsbury was not the only one to blame for this collapse, but when you are being paid $153 million over 7 years and you can barely hit .250, then eyes are going to be on you.

Jacoby Ellsbury is not capable of what his contract numbers say he is. Even when he was with the Red Sox, his best season was not worth what he is being paid now. The Yankees are overpaying him greatly along with a few others like Headley and Tanaka.

Everyone remembers the offseason between 2013 and 2014. It was a tough one. Robinson Cano left, Curtis Granderson left, and huge money was spent on McCann, Ellsbury, and Tanaka. That all happened, but not necessarily in that order. Big money was spent to get McCann and Ellsbury in early December. Shortly after, Granderson and Cano both signed their deals with the Mets and Mariners. This happened within days. If that money wasn’t spent on McCann and Ellsbury would we still have Cano and Granderson? Granderson has outperformed Ellsbury in the past two years and if Cano was still in New York then there never is a Stephen Drew problem (which was a big problem). But who knows? Maybe it wouldn’t be like that. All we can do is imagine.

Ellsbury’s large contract takes a big amount of their payroll making it tougher for them to sign a very good free agent over the offseason. Another way he is hurting the team. The Yankees need a dominant starting pitcher who can win a game for them when it comes down to a one game playoff in the Wild Card. The Astros and the Cubs have both showed how important that is already this year. David Price is a free agent this year and seeing him in pinstripes would be pretty easy on the eyes if you ask me.

The only problem: who would want Ellsbury with his poor performance and all the money he has left on his contract. That’s a simple answer. Nobody.

So until we can find a solution to this problem (and of course all of the other problems like Girardi, Hal, Headley, and Gardner. Those are for a different article) we will not be seeing ring number 28 coming our way anytime soon.