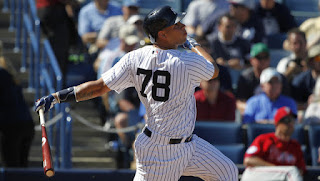 Gary Sanchez, the Triple-A catcher is one of eight Yankees minor leaguers who are playing in the Arizona Fall League along with 3 other position players and four pitchers. In 7 games in Arizona, he has had 14 hits in 23 at bats for a .467 average. He has hit 4 home runs, 2 doubles and has 14 RBIs so far.

Sanchez will be turning 23 over the offseason and he shows potential to be an everyday catcher for the Yankees in the future, and this may be coming sooner than you might think. In the minors in 2015, he hit .274 with 18 home runs in 365 at bats (.262 with Trenton and .295 with Scranton). He was one the Yankees September call ups and he got two at bats while he was up, but didn’t get on base.

Brian McCann will be 32 at the beginning of next season and he has 3 more years left on his contract. His two years with the Yankees have been two of his worst years in the MLB. He hit only .232 in 2014 and 2015. At the beginning of the 2015 season, he showed signs of improvement, but the second half, he showed that it was probably false hope that Yankee fans had in him. Before the All Star break, he hit .259 with a .331 on base percentage, but after the All Star break, he only hit for a .200 average and a .306 on base percentage.

I do realize that Brian McCann is only 31 now and he has a lot of time to turn his play around, but from what he has shown he is not going to do that. His past four seasons have been his worst four, and he doesn’t look like he is getting any better.

Catching is a very tough position to play and it can wear you out faster than any other positions would. This is why you will see older catchers transition to first base towards the end of their career. It could be that McCann has already reached his peak, and now all he can do is be a .230 average hitter with slightly above average defense behind the plate. He did have a good year in terms of throwing people out. He caught 36 percent of runners that tried to steal on him, but Gary Sanchez also caught 36 percent of runners in the minors.

If Brian McCann comes out next year and shows us the same type of play that he has been, then the Yankees should give Sanchez a couple games behind the plate just to see how he does. Sanchez could be great, and we might find ourselves a new starting catcher, or maybe it may give McCann a wake-up call and make him realize that he needs to start performing better.

It would be tough to move McCann and his large contract to the bench. Nobody wants to pay a bench player millions of dollars. So if Sanchez comes up and proves that he can perform at a major league level, the Yankees could look for possible trade options to send McCann and his undeserved contract away.