The True Problem With The Yankees Coaching Staff

By Unknown - October 31, 2015
Last week we learned that the Yankees have yet again made minor, or as I would argue, insignificant changes to their coaching staff. The firings of hitting coach Jeff Pentland and bullpen coach Gary Tuck this offseason are reminiscent of last year’s dismissal of hitting coach Kevin Long and first base coach Mick Kelleher. As the Yankees are sitting at home playing golf, Kevin Long is back in the World Series with the Mets, and Dave Eiland, the former pitching coach who was fired following the 2010 season, is in the fall classic for the second straight year. I am becoming increasingly frustrated by the inability of the Yankees front office to recognize the true nature of the problem at hand. Continuously changing the coaching staff will have no effect on the play of the team. The issue facing the Yankees is one of systemic proportions, and it starts with the manager: Joe Girardi. As has been evidenced by the fact that the Yankees have not played in a playoff series since 2012, Girardi should be on the hot seat. To the casual observer it would appear that his message no longer resonates in the clubhouse. Every manager has an expiration date, and quite frankly, I believe Girardi has reached his. The Yankees can mix up the coaching staff all they want, but to expect different results, without removing the source of the problem is insanity. In order for the Yankees to excel once again it is imperative they part ways with Girardi. 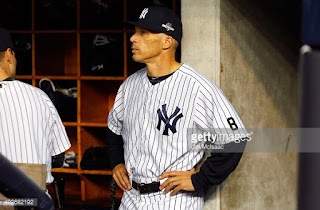 I was never a big fan of Kevin Long, and I understood the need to fire him after 2014’s disgraceful offensive performance. He had been there since the Torre days so the need for a fresh face was understandable. On the other hand, I was quite shocked that they decided to part ways with Pentland after only one season. In my view, the Yankees are simply making a change to make a change. This nonsensical approach makes me wonder what the logical reasoning was behind the firings. I have written numerous articles criticizing Joe Girardi (CLICK HERE FOR THE LATEST). His insistence on resting players when they are playing well, and inability to manage a pitching staff are two of the various reasons I dislike Girardi’s managing style. I could delve deeper into this, but for the sake of the clear and concise argument I’m attempting to make here, I’d like to avoid the redundancies.

I haven’t a clue as to why the Yankees continue to make pointless changes to the coaching staff. In my eyes it doesn’t really matter who is on the coaching staff because as long as Girardi is the manager the results will remain the same. If the Yankees seriously cared about winning they would make real changes. Let’s put aside the core thesis of my argument for a moment. For a second I’m going to assume the role of a typical apologist and pretend that Girardi is not the problem. If the manager is doing such a fantastic job, then why was it necessary to fire two of his coaches for two consecutive seasons? When I approach a problem I like to look at the why, or in other words, the underlying issues behind said problem. By this, I mean it is imperative that we examine possible systemic issues before making fringe decisions. In the case of the Yankees, Girardi is the systemic problem with the coaching staff. Long, Kelleher, Pentland, and Tuck are simply fall guys for Girardi’s incompetence.

The firings of Mick Kelleher and Gary Tuck were inconsequential and done solely for the sake of making changes. The offense has obviously been a huge problem for the last three seasons. Up until August, the Yankees offense was a dynamic force, and quite frankly a pleasant surprise. As the dog days of August rolled around, the Yankee offense faded away into oblivion. This issue reared its ugly head in the AL Wild Card game. From April-July, most Yankees fans were fully supportive of Pentland. Isn’t it amazing how the front office could turn on him because of two bad months? Girardi has had a bad three years and STILL has not been put on the hot seat. In most functioning workplaces, management will identify detriments to the business and rectify them. Joe Girardi is one of the biggest problems facing the Yankees, and remarkably they refuse to make the substantive change that is needed. As a fan, I am infuriated that this team has given him immunity for his sustained failures. It’s as if the only reason he still has his job is the 2009 title. 2009 was six years ago! Significant changes must be made. We need an overhaul, and that starts with the incompetent manager.

After hearing that the Yankees fired Tuck and Pentland I have to admit my first reaction was a subtle eye roll. The Yankees have continued their trend of the last few years. Instead of addressing an overtly conspicuous problem they chose to make an inconsequential change in order to save face. If this current Yankee regime really cared about addressing the coaching issue they would make changes where changes must be made. Joe Girardi looked clueless in the dugout for much of the 2015 season. That being said, I have no reason to believe he will magically become competent in time for 2016. As I’ve previously noted, every manager has an expiration date. Joe Girardi has hit said expiration date. Jeff Pentland and Gary Tuck were not the problem. They were the fall men for Girardi’s incompetence. It’s about time the Yankees begin to hold Girardi accountable for his failures. I’m infuriated by the inability of the front office to address blatant shortcomings. I made this declaration last year and I will make it again. The Yankees will never win another World Series as long as Joe Girardi is the manager.