By Unknown - October 08, 2015
Following our pathetic performance in this years AL Wild Card game, I have had some time to reflect on some changes that must be made. It is painfully apparent that the Yankees are in desperate need of a right-handed power bat. During the first half of the season, Alex Rodriguez and Mark Teixeira held their own against lefties, however after Teixeira’s injury, Rodriguez began his offensive struggles, and the Yankees offense became anemic against left handers. Down the stretch, the Yankees were dominated by lefties, and this trend only continued when Dallas Keuchel, as he had done all year, shut the Yankees down, this time on three days rest. Girardi’s decision to start Brett Gardner, who couldn’t get a hit off Keuchel if his life depended on it, over Jacoby Ellsbury, was perhaps one of his biggest managerial blunders. I could go on for days ranting about Girardi, but for the purpose of this piece I will avoid the banter. I’d like to preface this by pointing out there are many players I wish the Yankees could get rid of, but due to contractual and financial obligations it would just not be feasible. Amongst these players are Brian McCann, Jacoby Ellsbury, and Chase Headley. Since we are forced to deal with the above three players for the foreseeable future I have identified three others we can trade who can actually bring back a return that can help this team: Brett Gardner, Michael Pineda, and Ivan Nova. 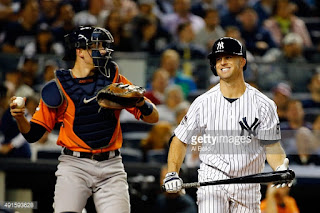 Oh Gardy, where shall I begin? When everyone was hopping on the Gardner bandwagon in July, I was one of the notable exceptions. I also recommended that the Yankees sell high on Gardner at this year’s deadline. With the unsustainable performance he was putting on, Gardner could have netted the Bombers a very pleasant return. Brett Gardner is mediocre to average, and is best in a platoon role. He is an awful base runner, despite his impressive speed, and makes many routine mistakes that have led to Yankee losses. I understand many fans like Gardner because he is homegrown, however we must accept the reality that he is hurting this team and must go. I would much rather trade Ellsbury, however his albatross of contract makes that highly improbable (side note: lets take a minute to thank Brian Cashman for signing Ellsbury over Cano).

Aside from Brian McCann, Gardner was our worst offensive player in the second half. This second half decline has been a theme of Gardner’s career, and the stats bear this argument out. After his impressive first half, in which he was named to the All-Star team, Gardner began his downward spiral. Our lineup has far too many left-handed bats, and we need a change. I have nothing against Gardner personally, however trading him is the only feasible route the team can take in order to improve this fatal flaw. I would hope the Yankees could acquire a proven middle reliever for Gardner, similar to the acquisition of Justin Wilson in exchange for Francisco Cervelli last season. Our bullpen, aside from Miller, Betances, Wilson, and Warren, is horrendous and improvements here are necessary. Though the Yankees did sign Gardner to a four-year fifty-two million dollar extension last offseason, the contract should not be a problem to unload. Reliable relievers are much more valuable to the Yankees than Brett Gardner at this point.

The “dynamic duo,” as dubbed by Brian Cashman, of Ellsbury and Gardner, never materialized, and a change has to be made. I would recommend signing Yoenis Cespedes this offseason. His right-handed power bat would translate very nicely at Yankee Stadium. Yes, the contract would be substantial, however it would be worth it. The presence of Cespedes in the lineup would help alleviate the pressure off of Rodriguez, Teixeira, and Carlos Beltran next year. The lineup instantly becomes more dynamic, considering Cespedes not only hits for power, but also average. This is the type of player the Yankees are missing. Similar to Rodriguez in his prime, Cespedes is a five-tool player who can do just about everything. With this in mind, I recommend the Yankees bid farewell to Brett Gardner, who clearly cannot play up to par in the second half.

I think I speak for the majority of Yankees fans when I say I am fed up with Michael Pineda. While he has at times shown flashes of being a top of the line pitcher, he has not been able to do it with any consistency. He can go from a dominant potential ace into a train wreck from start-to-start. He is undependable, and the Yankees need consistency out of the rotation. With the exception of Luis Severino, I don’t trust any of our starting pitchers in a big game, and although Tanaka pitched decently in the wild card game, he showed his biggest weakness: the long ball.

What can the Yankees realistically get out of Pineda? Pineda had a decent year overall so his stock may not get higher than it is right now. The Yankees by now realize what Pineda is, inconsistent and injury prone, therefore they should sell high and trade him this offseason before his biggest weaknesses rear their ugly head next season. The approach the Yankees failed to take with Brett Gardner is the same exact one they should take with Pineda. In exchange for Pineda the Yankees should be able to bring in a solid relief pitcher, or maybe even a young starter with promise. At the very least, we can get prospects that can help further our youth movement.

I know that Pineda’s exit would make our rotation weaker, but have no fear because I also have a solution to this. As demonstrated by Tanaka’s inconsistencies, the Yankees desperately need a true ace. Ladies and gentleman, David Price is that true ace. Although I lobbied aggressively for the Yankees to acquire Price at the deadline, I understand why they chose not to pull the trigger. This offseason the Yankees NEED to get Price. He was the difference for the Blue Jays this year, and he can undoubtedly make that impact next year and beyond in New York. Yes, the contract could resemble CC’s in a few years, however winning a championship or two would make this worth it.

I am praying that I never have to see Ivan Nova in a Yankee uniform again. It would be ideal if the Yankees were to non-tender him this offseason, however if he is given a contract, I would quickly flip him for possibly a mid level prospect or reliever. Nova has proven time and again he will never figure it out, and I am getting tired of watching him lose this team games. We may not get much for him, but he has to go. The Yankees have had Nova on the major league roster since 2010, and he has been unable to figure it out. Quite frankly, I have no reason to believe he will ever figure it out. Nova cannot be depended on, and I don’t want him wasting a rotation spot.

Conclusion: Due to contractual obligations, Brian Cashman will need to get creative this offseason in order to improve the roster. I like the idea of an Ackley/Refsnyder platoon at second because this is quite an improvement over the offensively challenged Drew/Ryan duo of 2015. Aside from second base, we have a player at every position. Gardner is the one player who can be used as a trade chip, and his weaknesses outweigh his strengths. Cespedes would drastically improve our lineup, and is a move worth making. My ideal rotation for 2016 would be David Price, Masahiro Tanaka, Luis Severino, Nathan Eovaldi, and Adam Warren/CC Sabathia. If CC proves he can come back and be effective I would give him a shot and keep Warren in the bullpen where he has excelled, but again I say this purely for contractual reasons. Unless the Yankees make drastic improvements this offseason, they will likely see the same result as 2015. A-Rod, Teixeira, McCann, Ellsbury, and Beltran are all a year older. We need players in their prime who are ready to perform at a high level. Trading Gardner, Pineda, and Nova opens the door to the Yankees signing David Price and Yoenis Cespedes. The aforementioned moves make us a legitimate World Series contender, and I hope Brian Cashman realizes this.