By Chad Raines - October 05, 2015
Once game 162 is put in the books and your team has made the postseason, wipe the slate clean because anything can happen. Players have been great all year may continue to rise in the postseason, but they may crumble under the pressure. People who have consistently struggled over 162 could catch lightning in a bottle and be key in a deep postseason run. Just a few of the reasons the baseball postseason is the best. 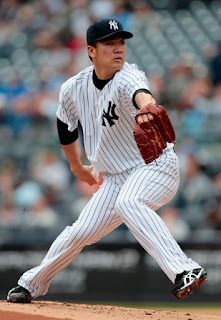 The Yankees have their best pitcher on the mound Tuesday in Masahiro Tanaka. He hasn’t been as effective as he was in 2014, but I completely support the decision to give him the ball. His last four starts against current playoff teams (Mets, Blue Jays x3): 28 IP, 5 ER, 17 H, 24 K, 1.60 ERA. All really quality numbers against two teams who won 90 or more games this season.

Tanaka has also been the one Yankees starter that can go out and weave you a gem. It’s tough trusting a rookie, even though he’s been electric since being called up, and it’s tough trusting an aging lefty that throws 90 mile per hour fastballs and pitches like he still throws 96 MPH. Tanaka has been the obvious choice all along.

Regardless of the struggles coming into the wild card game, none of it matters. The Yanks were throwing a lot of their September call up’s in the action and resting regulars each and every day.
Have I mentioned Dallas Kuechel has never started a game on three days of rest? Oh I haven’t? My apologies. Not only did he pitch on Friday, he threw 100 pitches. Now, I understand he’s an elite pitcher in today’s game and I understand he’s completely shut down the Yanks TWICE this year. That being said, you never know how your arm and your stuff is going to be after three days rest, something he’s never done as I mentioned previously.

Giving up now would be disappointing after a successful 87 win campaign the Yanks gave us. Hopefully the stadium is rockin’ Tuesday and the Yanks give us a big win against one of the best pitchers in the game.