By Chad Raines - October 05, 2015
Well, it’s simple, you find somewhere to put him. The rookie Greg Bird has been everything the Yanks could have hoped for and beyond and management cannot justify not finding a spot for him more often than not. 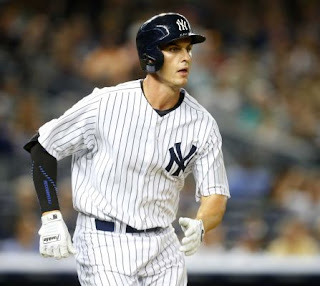 Does his .255 batting average pop out at you? No. Does he strike out more than you’d hope for? Absolutely. But, he’s been phenomenal in every other facet of the game. He has extraordinary pop at the dish, a .523 slugging percentage backs that notion up. As does 11 home runs in 153 AB’s. This year’s OPS league average was .722, Bird’s was .862.

Watching Bird’s approach from the moment he first stepped in the box was the most impressive part of his game. He has exquisite eye at the dish and can lay off very tough pitches in tough moments.

I can’t spend the whole time ranting about his offensive talents when he can pick it with the best of ‘em over at first. He’s no Mark Teixeira, not many people can do what does with that big oven mitt over there, but Bird is no slouch. As Tex did before him, Bird has picked numerous throws out of the dirt, saving runs, base-runners, and extra bases.

What hinders Greg Bird every day in 2016 is Mark Teixeira is still a rostered Yankee. Sure, Teix is going on his 36 year old season but if 36 is as productive as 35 was, he’ll be manning first base every day. Bird will absolutely see time at first next season. Teix will need days off and barring something insane, he’ll be injured at some-point and we will see a lot of first.

My thinking is Bird will see a lot of time at DH next season. Maybe in a platoon role with A-Rod, depending on how Alex is playing. Maybe he’ll even learn to play some outfield next year, when Beltran needs a day off here and there.

Either way, come 2017 Greg Bird will be the New York Yankees everyday starting first basemen. Until then, find the man some damn playing time!