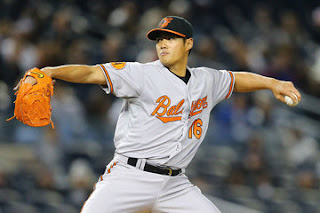 This past season the Yankees surprised many when they over-achieved and made the postseason. They did this with timely hitting (that was extremely streaky at times), a pretty lethal back-end of the bullpen, and a so-so rotation. It is expected that teams like the Red Sox and Orioles won’t just sit back and do nothing this offseason, so if the Yankees expect to make the postseason next season they need to upgrade their rotation. One guy who in my opinion is one of the most underrated starters in the Bigs is former Baltimore Oriole Wei-Yin Chen. Here are 3 reasons the Yankees should sign Wei-Yin Chen.

1)      Wei-Yin Chen has pitched to a 3.72 ERA in 4 seasons in the AL East
One of the most over looked aspects in the game of baseball is familiarity. Chen is no ace by any stretch but is a valuable number 3 like starter who has experience pitching in the sometimes brutal American League East. This experience should bode well for him pitching against other rivals in the division.

3)      Expense
With the days of the Yankees spending big on starting pitching seemingly over (for now at least), cost is something that seems to be important to the Yanks. Unlike big free agent pitchers Zack Greinke, David Price and Johnny Cueto, Chen figures to be much cheaper option. While he may not be in the tier of pitchers, as I just mentioned, he still can be very effective and under their cost. Chen will be 30 heading into next season, so perhaps a 4-5 year deal wouldn’t be a terrible idea. He would probably cost the Yankees somewhere in the range of $55 million-75 million over those 4-5 years. So, if the Yankees can manage to get him somewhere on the lower end of that scale they should consider it. The Yankees will have a lot of question marks in their rotation next season. Chen may not provide the answer, but perhaps he might be a piece to the puzzle.