Alex Gordon is Best Fit for NYY if Gardner is Traded

By NYY v BOS - November 19, 2015
It's been a very quiet offseason for the Yankees thus far. A minor and rather uninteresting trade for Aaron Hicks has really been it for the Yankees. However, rumors still continue to swirl about the Yankees trading Brett Gardner and he has been reportedly a chip in discussions with the Mariners and more recently the Cleveland Indians. I personally think the Yankees should try and unload the more expensive, and perhaps inferior, Jacoby Ellsbury - this however will almost certainly not happen.

For each of 3 teams mentioned, #Indians would obtain everyday OF and part with a starting pitcher. Many scenarios in play for CLE. (2/2)
— Jon Morosi (@jonmorosi) November 18, 2015

Let's say for a second that Gardner is traded. Then what? Apparently Brian Cashman thinks the aforementioned Hicks could be an everyday outfielder, but if that's the case, you might as well keep Brett Gardner, whom would be a better option than Hicks. 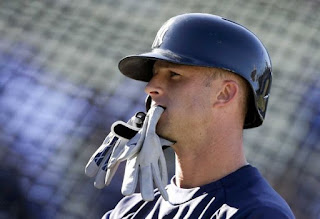 There was some speculation that Yoenis Cespedes would be an option, however it appears that the bidding might get higher than the Yankees would be comfortable with and as a result wouldn't be a real serious contender to sign him. Justin Upton and Jason Heyward however, seem like more realistic possibilities for the Yankees to sign. Both are purely speculation at this point, but each certainly would make some sense.

The Yankees have been linked on and off with Upton through trade rumors dating back to his days an Arizona and apparently they were interested in acquiring him from Atlanta before he was moved to the Padres last offseason. The fit here is pretty obvious. The Yankees really lack a right-handed power bat outside of A-Rod and Upton certainly fills that role having averaged 27 homers and 83 runs driven in the last three seasons. That number could increase to routinely thirty-something in Yankees Stadium and I really wouldn't complain much if the Yankees signed him. 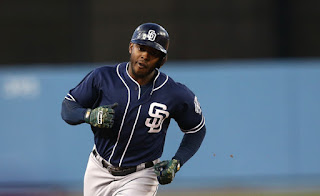 Heyward was also traded form the Braves last winter, but is a drastically different player than Upton. His biggest asset is his glove by which he brings possibly the best outfield defense in the league while being above average at really everything else. He has a bit of pop, having averaged 19 home runs a year since entering the league (though it's only been 13 a year the last three seasons) and turned in his best batting campaign this last season registering a .293 average. MLB Trade Rumors actually has predicted the Yankees will sign him to a 10 year/$200mil contract. I won't necessarily dispute if that will happen - MLBTR case knows what they're talking about - but I will question if it should happen.

Heyward is a great player - my argument for signing Alex Gordon is actually based on how similar the two are, however 10 years and $200 million are an awful lot for a guy who is primarily a good outfield defender. A 10 year contact is scary enough to begin with considering injury and performance worries, but it's really hard to justify giving such a contract to a guy who is nothing more than just decent at the plate. Sure, outstanding defense and said decent-goodish hitting ability would be an asset to the Yankees, but is it worth $200 million?

There's plenty of guys out there who could be signed to play solid defense for a fraction of the price. If we wouldn't give Robinson Cano who was a superstar offensively and, to a lesser degree, defensively 10 years and $200 million, I have a hard time understanding why we should for Heyward, aside from age difference.

That brings me to an outfielder no Yankees fan is talking about - Alex Gordon. Gordon has quietly been one of the best outfielders in the game since breaking into the league. Gordon has incredibly similar numbers to Heyward offensively (career averages):

Are they star-like? No, but they are what could be considered good offensively. Both players remind me of what I wish Brett Gardner would be - a solid defender that can hit at a decent clip and go deep every now and then. As mentioned, each are elite defensive outfielders, with Gordon having won four Gold Gloves and Heyward having three.

So if they're so similar, how do we choose? The answer is simply money and years. While MLBTR has Heyward predicted to sign a 10yr/$200mil deal, they have Gordon projected to land half that at 5yrs/$105mil. 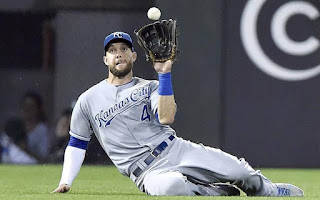 The Yankees have made if pretty clear they have no desire to sign anyone to a 10 year deal (thanks A-Rod) from here on out and the ability to get a player who really is almost exactly the same as Jason Heyward for half the price in Alex Gordon would be gold. The Yankees can't turn their noses up at that kind of discount.

Yes, it's the Yankees and yes they have a lot of money, but keep in mind the current management of the organization has shown it doesn't want to shell out big money or years even to elite free agents, thus Gordon becomes a great option offering Heyward like production without demanding as much financially.

The harder argument is explaining why Gordon over Upton. Upton is certainly the better offensive player though he has had a negative dWAR every year he's been in the league. However, the argument against signing such a strong offensive player is more than simply below average defense.

The Yankees have up and coming right handed sluggers in the minor league system that aren't far off from the big leagues, specifically Gary Sanchez and Aaron Judge. Sanchez has been on fire in the Arizona Fall League after a strong year in the minors this year and the trade of John Ryan Murphy to the Twins makes at seem as if the team has plans to utilize him in the Bigs sooner rather than later.


We all know about Aaron Judge. Standing at a towering 6'7 and 230lbs. Judge has drawn Giancarlo Stanton comparisons that seem legitimate when you see that he's hit 37 dingers in just two minor league seasons. Judge hit Triple-A this year and the belief is that he will hit the majors late this year or take over after Beltran's contract expires next year.

These two guys could provide right handed power, and lots of it, as soon as this year (though more likely next) and may be able to effectively spell Upton at a cheaper price; he's projected to sign a 7yr/$147mil contract.

For the time being, I think the Yankees have power sources to make due this upcoming season. Mark Teixeira was his usual self after finally coming into a season fully health and is a threat to go deep from both sides of the plate. Fellow switch hitter Carlos Beltran didn't set the world on fire, but also enjoyed a bounce back year and should also remain a power threat alongside guys like Teixeira, McCann, and A-Rod.

The argument could be made that the Yankees need players that can help manufacture runs (Alex Gordon) instead of power hitters (Justin Upton) as we found last year that when the Yankees weren't hitting home runs, they weren't scoring.

My point is that Gordon provides great production and value to the team while being cheaper than either Upton or Heyward and that fits the Yankees current plan. The team would save $47mil signing Gordon as opposed to Upton and $95mil signing Gordon as opposed to Heyward (assuming the contracts similar are close, if not accurate) and that better benefits the team now and in the long run.

The Yankees have powerful reinforcements coming in the minors who will likely be bargains for their far smaller contracts and now would be the time to nab a great defender and more contact oriented hitter for a comparatively cheaper price to compliment said prospects when they finally hit the big leagues.