Are A-Bombs from A-Rod Good for Baseball? 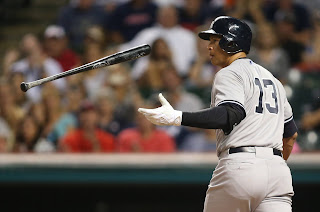 Baseball history has its share of true legends who have transcended the game into a greatness that seemed unmatched by other sports. Players like Lou Gehrig, Hank Aaron and the “Great Bambino” Babe Ruth, have blessed the sport of baseball with their powerful swings, presence, and all around great play. Since this time a lot has changed. Baseball has become sort of a secondary if not some people’s last choice in sport to follow. This isn’t because those much appealing “long balls” are gone, it just has more to do with how they have managed to hit the seats and whom the sender was. The once glorified home run ball has now become, in some eyes, a mockery of sorts. Players like Sammy Sosa, Barry Bonds and star New York Yankee slugger Alex Rodriguez have participated in providing baseball’s biggest value of entertainment. It’s how they did it that kills many baseball fans.

If you don’t know the stories of these type of men and you’re a baseball fan perhaps you have been living under a rock or something. The biggest “stars” that have been a part of this game are also considered the biggest crooks. These players who could have been a part of baseball lure have instead chosen a different path. But there remains this question that has remained over the steroid era; are guys like this good for baseball? And more from a Yankee perspective, should the Yankees be employing A-rod. The answer, in my opinion is yes.

Let’s face the sheer facts here, there are a lot of other sports out there that have that sex-appeal, or that flavor that every sports fan craves. In basketball you have the dunks, in soccer the bicycle kick goals, in football the spectacular receiver catches, and in baseball it’s the home run. Not a lot of casual fans are going to sit back and enjoy watching a pitcher’s duel. While this may appeal to the more avid fan it certainly won’t have viewers tuning in to watch. In order to get some of these casual fans to become bigger fans the long ball must still be in effect.  This is where players like A-Rod come in.

Back in the beginning of 2007, I was like some baseball viewers, a casual fan. I grew up in a household of some Yankee fans, mostly my older brother and grandfather, and I had taken to the Yankees as well. However, I was yet to be truly acclimated with the game of baseball and the fandom of the Yankee lovers. I’d watch a game every now and then, looking for perhaps a reason to watch some more. Bring in Alexander Emmanuel Rodriguez. I began watching the Yankees primarily back in 2007, and I was hooked. My love for the Yankees began at this time and it was all thanks to my guy Alex Rodriguez.

Many may scoff at the idea of a known cheater being their hook into baseball, but I say nay to all the haters and my reason being is simple. Baseball, like many teams in the sport itself, is a game that lives and dies by the long ball. The phrase “Chicks dig the long ball” wasn’t just some silly myth but honestly is as close to fact as being a fact can get. So when I fell in love with baseball and my favorite team The New York Yankees it was during this monstrous home run hitting season by A-Rod back in 2007.

Now, I don’t want anyone to mistake this by me suggesting that I find cheating honorable or that I commend players like A-Rod for using PEDS. The point I’m trying to make is that the fact of the matter is, in my opinion that baseball was built and is continually built upon the long ball. A lot of these HR hitters who have been caught shouldn’t be glorified but also shouldn’t be banned for life either. No matter how you stretch it, these guys, a lot of them anyway, with or without PEDS are still the primary HR hitters and that is what drives people to this go and watch baseball. The appreciation for pitcher’s duels, fielding highlights and speed on the base paths doesn’t happen without the gateway of the homerun. So personally, I’d like to thank A-Rod for getting me into the sport I love, and the team I love the Yankees. For all those who don’t agree, keep this in mind: It may be time to #FORG1V3.