By Unknown - November 19, 2015
Throughout the last couple of days there have been rumors circulating, which indicate that the Yankees are looking to move closer Andrew Miller as a way to improve the starting rotation. While starting pitching is an urgent need for the Yankees, they should not do so at the expense of losing Miller. In his first year in the Bronx, Miller put up terrific numbers, and quite frankly made me forget David Robertson even existed. Late inning relief is one of the few spots in which the Yankees have an advantage over most of the other teams in the league. To surrender this advantage would be asinine. With that being said, I would like to emphatically beg General Manager Brian Cashman to refrain from trading Andrew Miller. Losing Miller would be extremely detrimental to the team’s prospects in 2016. While trading from a source of strength to improve a glaring weakness would normally reconcile with conventional wisdom, in this case that source of strength is too important to weaken. 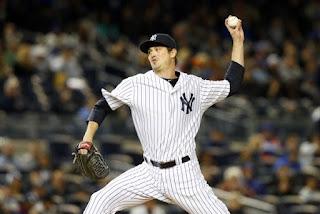 In 2015, Dellin Betances and Andrew Miller formed one of the most lethal late inning combinations in Major League Baseball. Miller posted a 2.04 ERA with thirty-six saves in thirty-eight opportunities during his first season in the Bronx. Following the retirement of the great Mariano Rivera in 2013, I have to admit I was quite nervous about who his successor would be. While David Robertson filled in admirably in 2014, he was nowhere near as efficient as we would have liked. He also nearly blew Derek Jeter's last game at Yankee Stadium! It seemed as if every night he was pulling a Houdini act to get out of trouble and lock up the win. The aforementioned reason is why I was not too disappointed when they let Robertson walk, and brought Miller aboard. Although we initially expected Miller to set up Dellin Betances, his utter dominance permanently won him the closer job.
The Yankees have a number of holes they need to fill heading into the 2016 season, with the starting rotation being the most overt. I can’t fathom why Brian Cashman believes it would be a good idea to trade Miller. Yes, the team desperately needs starting pitching considering Masahiro Tanaka and Michael Pineda are perennial injury concerns, Nathan Eovaldi ended the season on the disabled list, CC Sabathia has just left alcohol rehabilitation, and Ivan Nova is awful. The only starter I trust at this moment is rookie Luis Severino, but I digress. With our starters unable to last more than five or six innings on a consistent basis, the tail end of the bullpen really carried the 2015 Yankee team. There were countless games where the lockdown formula of Justin Wilson, Dellin Betances, and Andrew Miller sealed a close victory. If you take Miller out of the equation, the bullpen becomes that much weaker. Considering the Red Sox just acquired Craig Kimbrel, and there aren’t any free agent closers that are comparable to him in dominance, Miller’s absence would be a huge hit to what has been the best part of the team. While many would like to see Betances slide into the closer role, he channeled his inner-David Robertson way too much last season. There is no doubt that Betances’ stuff is absolutely filthy and he’s been amazing for the Bombers, however he has yet to consistently perform as a closer. I’ve always been told if it’s not broken don’t fix it. I think that saying fits perfectly in this scenario. Andrew Miller has proven his ability to not only succeed, but also dominate on the big stage in New York. There is no need to trade a closer who has put up numbers comparable to the great Mariano Rivera. There just isn’t.
Now, this leads to me the most important question of all. If the Yankees were to trade Miller, what would they get for him? Getting an elite starting pitcher, as many have conjectured, is just unlikely. Why would a team like the A’s trade Sonny Gray for a closer? They are going nowhere in the foreseeable future, and would presumably be looking to add prospects. I’ve also heard rumors of Miller being packaged with Gardner to land a big name starter. Both of the scenarios seem very unlikely, so I pray to God that Brian Cashman regains some form of competence, and comes to the realization that trading Miller would be a grave mistake. The better approach to improve the rotation would be through free agency. Although Hal has demonstrated his frugality, he should be willing to sign the right guy. In my view, the Yankees problem has not been the fact that they shelled out a lot of money, but rather that they’ve given that money to the wrong players. For example, this team would have been much better served if they resigned Robinson Cano, as opposed to bringing aboard the injury prone Jacoby Ellsbury. Brian Cashman, along with the Yankee Front Office, and Scouting Department, should evaluate the top free agent starters and determine who would be the best fit. Whether that fit is Zach Grienke, David Price, or somebody else is yet to be determined, however the free agent avenue would be much more fruitful than a trade if it means dealing Miller.
While I would not be completely opposed to trading for a starter, the package must be built around Brett Gardner or prospects, with the ladder being the more realistic option. Andrew Miller has been an amazing Yankee thus far, and trading would constitute a total travesty. Trading from a source of strength as dominant as the tail end of the bullpen is not a smart move. Moving Miller would not get us a top starting pitcher, so why do it? As I wrote earlier, if it isn’t broken don’t fix it. Dellin Betances and Andrew Miller closing out games is a lethal weapon for the 2016 Yankees so surrendering that weapon would be a blunder of epic proportions, even for Brian Cashman.