Brief Reaction to the Yankees Acquisition of Aaron Hicks

By Unknown - November 11, 2015
In what looks to be a busy offseason for the Bombers, GM Brian Cashman has made two trades today. We learned earlier in the day that Cashman shipped infielder/outfielder Jose Pirela to the San Diego Padres in exchange for pitcher Ron Herrera. Later, Cashman traded backup catcher John Ryan Murphy to the Minnesota Twins for outfielder Aaron Hicks. Needless to say, neither of these moves makes the Yankees any closer to being World Series contenders, however sometimes shaking things up may not be a bad thing. 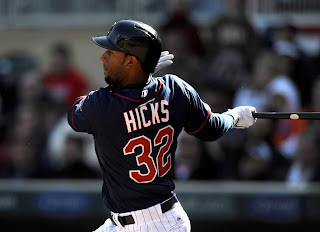 I’ve never been a fan of Brian McCann, so I have to say I’m a little sorry to see Murphy gone, but it’s obvious he would never get significant playing time with the Yankees as long as McCann is on the roster. The emergence of prospect Gary Sanchez gave Cashman the necessary flexibility to move Murphy and improve other aspects of the roster. This latest move all but eliminates the chances of Chris Young returning to the Yankees. Contrary to what Cashman may be saying now, Hicks will best serve this team in the role that Young played last year: a backup outfielder with some right handed pop. It's also worth noting that Hicks is a switch hitter. I’m praying that this move gives the Yankees further motivation to move Brett Gardner. Either Brett Gardner or Jacoby Ellsbury must be traded so we can add a right-handed power bat. Unfortunately, no sane GM would take Ellsbury’s contract so Cashman will be forced to move Gardner. I’d like to get either a serviceable starting pitcher or reliever/s in exchange for Gardner. Adding Hicks for the back up role, and unloading Gardner, opens the door for the Yankees to bring either Justin Upton or Yoenis Cespedes aboard.

As a frequent critic of Brian Cashman, I have been quite encouraged by his recent activity. I’m just frustrated he wasn’t as interested in improving the team this past July when they had an eight game lead in the division, and a serious shot at winning the World Series. I find it interesting that Cashman had so many untouchables at the deadline, but now nobody is guaranteed a roster spot. This is coming from the same guy who insisted on starting Stephen Drew for over a year, but I digress. Nonetheless, I don’t want to overemphasize the significance of these two moves because they are not consequential enough to get the Yankees where we all want them to be. I hope this is the beginning of a major shake up. The Yankees need a starting pitcher, a right-handed power bat, and some relief help. Now it is time for as fans to sit back and see what else Mr. Cashman can pull off. Call me crazy, but I think the Mets making noise across town really opened the eyes of ownership and management.