By NYY v BOS - November 23, 2015
Today it was reported that Robinson Cano is apparently unhappy in Seattle and wants back in New York. I don't think anyone is overly surprised by this. When you bolt for a poor franchise for nothing more than money this kind of thing happens.

Robinson Cano reportedly unhappy in Seattle, would like to go back to New York https://t.co/yGoTIYWIjn
— HardballTalk (@HardballTalk) November 23, 2015

This is coming off the heels of Yankee broadcaster Michael Kay advocating the team trade Jacoby Ellsbury to Seattle for the once beloved-in-New-York second base star. That's probably a decent starting point but I guarantee neither franchise would do that deal. 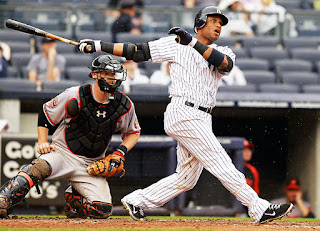 If this report is true though New York needs to pick up the phone and make a call to see what it would take. The Yankees having been reported as "actively" seeking a second base upgrade, so how's about the first or second best one in the league? We know what Cano was in the Bronx - a consistent 30 homer and 100 RBI threat that provided solid defense.

As mentioned earlier, Ellsbury and Cano switching teams makes sense. Putting Cano in a smaller park would allow him to utilize his smooth swing and hit for more power. Ellsbury could better utilize his speed by hitting in the spacious SafeCo Field where balls roll farther to the fence when hit in the gap.

The issue here is money - and that's a big issue. Cano will make $24 million a year until he's 42, good for a whopping $192 million total. I can tell you that the Yankees aren't going to take that kind of contact straight on. That's an awful lot of money to be paying a guy into his 40's.

And it doesn't really help that Ellsbury still has five years at $21 million a year left on his contract. Seattle could rid themselves of a bad contract by trading Cano, but they would still be getting a bad one back in Ellsbury. Hypothetically if they didn't pay any of Cano's contract in this trade they'd be saving about $87 million over three years in the end so I guess that's better than nothing.

I've seen the idea of Seattle eating two years of his contract in a trade (in theory, paying for the last two years on his contract) and I think that would have to be a given in any negotiation with the Yankees. That's probably somewhat fair considering it would cut their savings from the aforementioned $87 million to $39 million and if they had to pay any more there would be no point in doing the swap (Ellsbury isn't worth Cano in a straight up deal).

So assuming that Seattle would eat said two years, the Yankees would have to add to the deal. Let's add in Rob Refsnyder, whom would fill what would otherwise be a hole at 2nd for Seattle, and Ivan Nova. At this point Seattle still probably wants a little more, so let's sweeten the deal some.

Add Greg Bird. I know a lot of people have some sort of love affair with Bird despite his limited time in action, but Seattle could use a first basemen and one might make the argument he could be the hitter that Cano was in that lineup. Mark Teixeira is light years ahead of him anyways and could play first next year and beyond (he would probably take a qualifying offer, if tendered one). If not you can put a lot of MLB replacement level first basemen in Yankee Stadium and have them hit 20-30 homers a year without issue. First base is the last of our worries.

Now the scales would be leaning in Seattle's favor, so I suggest we take on James Paxton, whom the Yankees have already been connected to this offseason. Paxton's year was limited in 2015 due to injury, but in 2014 he sported a 3.04 ERA, showing he has some promise. The Yankees are clearly looking to trade for their rotation upgrade as opposed to shelling our big bucks on the open market and Paxton would be a good way to accomplish that. This rotation has been missing a solid lefty.

NYY Gets:
2B Robinson Cano
SP James Paxton
SEA Gets:
OF Jacoby Ellsbury
2B Rob Refsnyder
SP Ivan Nova
1B Greg Bird
(If you really don't like the Bird and Paxton part of it Ellsbury, Refsnyder, and Nova for Cano MIGHT do it)

That's probably pretty close. Off slightly one way or another, but to be fair, there's not exactly a prior trade that would be a good comparison to this. If I had to choose I would say that Seattle wins this slightly, but the Yankees would far and away be a better team than if they chose not to do this trade.

So would I pull the trigger on something like this? I'm not sure. Everything adds up here except the fact that Cano is already 33. His best is probably behind him and it's scary to bet on him still earning his money until he's 42. It's just so hard to project how a player will age. The difficult thing is they either age very well (like A-Rod or David Ortiz) or very poorly. If I was in charge, I would reluctantly pull the trigger in hopes that Cano stays productive while he ages, but I don't necessarily like the odds of it.

If you don't like this proposal though, I don't blame you. It's pretty risky. It makes a considerable amount of sense while carrying a considerable amount of risk. And this is all assuming the reports are true that he does want back in New York City. Do I think this will happen? No, way too much has to go right for it to happen. It's hard to imagine Seattle eating money on the contract and New York still taking it even if they did. It's fun to speculate though and maybe we will all get surprised and it will happen. If it does, look for a deal somewhere in this ballpark to be what gets it done.