Should the Yankees acquire Yasiel Puig? 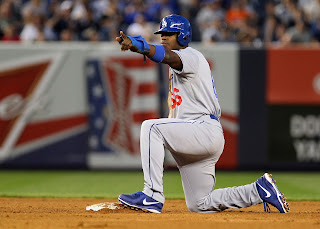 With the days of handing max contracts to top free agents seemingly gone, Brian Cashman has turned his focus to acquiring players with a high ceiling that haven’t quite reached their potential. This strategy has quickly shown signs of success, as the Yankees return to the postseason in 2015 may not have been possible without the emergence of Didi Gregorious, Nathan Eovaldi, and Dustin Ackley. Unfortunately, due largely to their lack of right-handed power bats, the Yankees were dominated by Cy Young award winner Dallas Keuchel in their one-game playoff. Should Cashman decide to forgo giving large contracts to the big righty bats on the market like Justin Upton or Yoenis Cespedes, acquiring Dodgers OF Yasiel Puig may be the perfect solution to prevent a repeat of game 163.


Many speculate that even after a down year where Puig hit .255/11 HR/38 RBIs in just 79 games, the Dodgers may not be willing to part with the Cuban native due to his upside and modest salary. However, ESPN's Buster Olney reported that the Dodgers management is “much more open to the idea of moving Puig than they would’ve been, say, 18 months ago.” The Dodgers are believed to be seeking players with immediate impact over prospects, and the Yankees may be able to put together a package that would benefit both sides.

Due to Puig’s antics both on and off the field, I believe that the Yankees should only pull the trigger on this deal if they can find a way to make it happen without parting with any of their young stars – namely Greg Bird or Luis Severino. A change of scenery could be exactly the wakeup call Puig needs, as showing up late on game day or constantly overthrowing the cut-off man will not fly in the Bronx. With veterans like A-Rod, Mark Teixeira, and CC Sabathia in the clubhouse, Puig would have players like those to mentor him on how the game should be played.

The addition of Puig would not only provide the Yankees with a righty power bat, but it would save them from handing out the $100+ million contracts Upton or Cespedes would command. With the Yankees frustrated with Michael Pineda’s inconsistency, and the Dodgers losing Howie Kendrick/Chase Utley to free agency, a package that includes Pineda and Rob Refsnyder for Puig and a middle reliever makes a lot of sense for both sides. It would also give the Yankees more flexibility in the unfortunate case they found themselves in a position where they had to entertain trading homegrown-talent Brett Gardner for a starting pitcher—even though shipping out Jacoby Ellsbury may be a more popular move with the Yankees fanbase.

If Cashman wants to continue the mold of acquiring players coming into their prime without overspending, Puig may be the perfect target.