The Designated Hitter: How will it shape up? 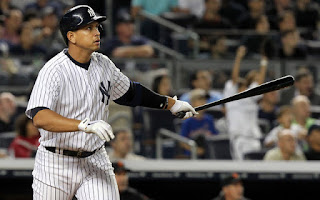 There are still various question marks as to what the 2016 team will look like, but I think all fans can agree one aspect will remain the same; Alex Rodriguez will be the designated hitter. No matter what, he is going to be back for the 2016 season. Well of course, unless he decides to retire which would surprise all of us considering the numbers he put up this year, and the fact that he wants to collect the money he is owed.

So why is this a big deal? A-Rod was a revelation for the Yankees this year putting up numbers nobody could have realistically expected. He provided a final line of .250/.356/.486. This doesn’t even tell the full story though, as he also played in 151 games, hit for 33 home runs, and put up his highest OPS since 2010.

Without this production, the Yankees don’t even sniff 85 wins. So yes, the Yankees need A-Rod to produce next year and continue to do it in a big way. But that’s the problem. Can we really expect these types of numbers next year? He’s just going to be a year older, turning 41 in July and is playing with two surgically repaired hips. Yeah yeah, it was the same narrative last year. People were questioning the same thing, and then A-Rod quickly quieted the critics and stunned all of MLB.

It should be noted though that Alex did slow down at the end of the season. In the first half he hit .278, while in the second half he hit just .216. I know, average isn’t everything, and that was probably the only startling stat. His OBP was relatively the same in the second half, so he was still drawing walks. In the “dog days” of August alone he hit just .153 with 2 homeruns.

I could keep on throwing stats out there, but you get the point. A-Rod was not nearly as productive in the second half of the season. Was it fatigue? Most likely, yes, but Alex wasn’t playing the field, nor did he run hard very often. It is left to be assumed that old age finally got to him.

If healthy, A-Rod will be on the opening day roster listed as the DH. He will remain the DH for the rest of the year, barring any type of injury. However, it remains to be seen whether he will be productive enough to help this team win.

My take? Give him off days during the long stretches of games. Make room for Beltran to DH every once in a while and tend to his health as well. See how it plays out. If Alex continues to hit, you don’t worry. But if it doesn’t look like he has anything left in the tank, the Yankees might have to consider a DH platoon of Beltran and Teixeira with Alex residing as a bench player. In reality, this is still an aging roster with many veteran players who are going to need their rest. With Teixeira and Beltran coming off the books after 2016, the Yankees will have lots more wiggle room to work with. The DH will suddenly be looked at differently, as Arod’s status is going to be unknown by then.

Ultimately, the DH will be a determining factor for the Yankees and their success in 2016. Can A Rod bewilder Major League Baseball for a second time? Or will the Yankees have a substantial problem to deal with throughout the 2016 season? Only time will tell.