The Kings of New York Still Reside in the Bronx: An In-Depth Analysis

By Chad Raines - November 08, 2015
A crushing loss in the World Series finally drew the Mets surprising season to an end. A talented and young pitching staff guided the team through the season while midseason additions jump started their once stagnant offense. Many in the baseball world were quick to jump on the Mets bandwagon and crown them as the Kings of New York. Let me say this, I was very happy to see the Mets do well and make it to the World Series. They are an exciting, talented young team that earned their place in October. I just could not bring myself to root for them because at heart, the Mets are a rival and I am a die-hard Yankee fan. The two teams are two completely different in their own ways and in this article, I’m going to give a position by position breakdown to see which team has the edge at each spot and why the Yankees still reign supreme in New York. in the present and future. 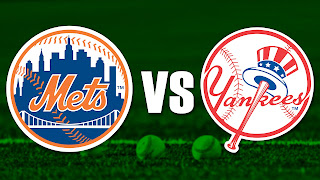 Edge: Mets
The injury bug and inconsistency have hit the Yankees hard in recent years. This Mets rotation is downright nasty. Jon Niese and Dillon Gee serve as valuable depth pieces which have proven to be a necessity for teams, as rest for the starters is imperative. Many tend to forget that the Mets still have Zack Wheeler, who is working his way back from Tommy John surgery. He will most likely slide into the #5 slot in the rotation next season.

Edge: Yankees
Even though d’Arnaud is young and will have a full season to produce next year, the reliable bat and work ethic of McCann combined with a solid backup in J.R Murphy gives the Yankees the edge at this position. J.R Murphy is only 24 years old and will in all likelihood become the Yankees catcher of the future once McCann finishes his deal. d’Arnaud is just two years older than Murphy, and it will be interesting to see how they both fare when they have a full season under their belt.

Edge: Yankees
This seems like it should be closer considering how good Duda has become in recent years, but when Tex is healthy, he is simply one of the best offensive and defensive players in the game. Having Bird, the eventual starter waiting in the wings, gives the Yankees the overwhelming edge.

Edge: Mets
The Yankees haven’t had a real second baseman since Robinson Cano and this year reminded us that they still haven’t found the answer. Daniel Murphy is the model of consistency and quiet leadership. It is fair to wonder though, if the Mets will re-sign him free agency. If they do not, it will be interesting to see who replaces him, with the most likely option being from the farm. It’s a toss-up of who will be the starter for the Yanks but depending on who the Mets have next year they could very easily have the edge here.

Edge: Even
Didi Gregorius’ defense is superior to both Flores and Tejada, but when it comes to the plate it is almost dead even. Didi’s .265 average and 56 RBI’s are nearly identical to Flores’ .263 average and 59 RBI’s. After settling into the Bronx after year one, Gregorius should have a great 2016 campaign. Flores and Tejada both can show what they’ve got next year and who will be the definitive starter.

Edge: Mets
Although Chase Headley is a fine player, David Wright is just a better player in almost every way. Wright hits for average and power, while providing proven leadership in the Mets locker room. The Yankees can only hope that Headley improves his game next year from both sides of the plate.

Edge: Yankees
This was a tough one. The Mets had great contributors from all parts of their outfield this season, but will there are many questions to be asked. Will they be able to re-sign Cespedes? Can Granderson keep producing as he enters his age 35 season? The Yankees on the other hand have experience and incoming youth on their side. Gardner and Ellsbury are one of the best 1-2 combos in baseball, Beltran found his fountain of youth and it is just a matter of time before prospect Aaron Judge makes his debut. Slade Heathcott and Mason Williams are young depth pieces for the Yanks OF as well. 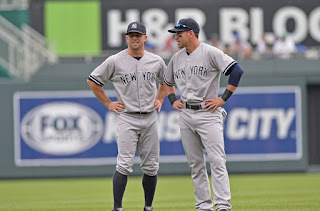 Edge: Yankees
Although the Mets bullpen improved greatly, the Yankees bullpen essentially made games with leads 6 inning affairs. The dominant force of Dellin Betances and Andrew Miller was the best 1-2 punch in the game. Arms like Justin Wilson and Adam Warren were effective and helped shorten games. If the Yankees can sign another power righty to take some pressure off of Betances, their bullpen should be just as dominant next season. If the Mets can re-sign free agent Tyler Clippard their bullpen should be a solid group. 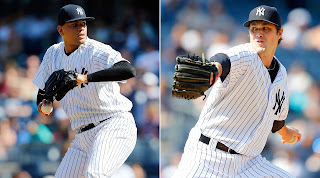 It is clear to see that the Mets and Yankees are two very similar but very different teams. The Yankees biggest strengths being their bullpen and power hitters while the Mets rotation and infielders were for the most part superior. Free agency will have a big impact on how these teams look next year and who will hold the edge at each position. Both teams’ futures are bright, but in different areas. However, even though the Mets made it to the Fall Classic, the Yankees still wear the crown in New York. Big contracts will be coming off the books and the rise of talented prospects such as Greg Bird, Luis Severino and Aaron Judge have the makings of a solid core to build on. The yearly Subway Series should get a whole lot more interesting the next few years, with the Mets trying to steal the crown, and the Yanks sitting on the throne.