Why Jason Heyward is not the answer 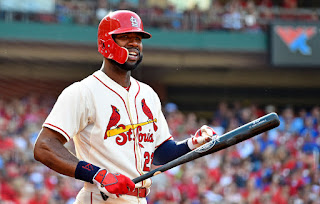 Ten Years, $200,000,000. This is the contract, free-agent left-handed hitting outfielder Jason Heyward, is projected to receive this offseason according to the MLB Trade Rumors website. The team they are predicting to sign Heyward is the New York Yankees.

As a Yankee fan, the thought of signing a 26-year old outfielder entering the prime of his career can be an exciting idea, especially after watching the demise of the offense in the last couple of months of the 2015 season. It makes the Yankees younger, which is what fans have been wanting for a few years now, and it makes the Yankees more complete with a player who adds speed, above-average defense, and excitement to a lineup that can seem rather boring at times. Jason Heyward seems like a great player who would positively impact this team, but is he really a fit for the Yankees, especially at the size of his projected contract?

The Yankees already have a left-handed heavy lineup with Jacoby Ellsbury, Brett Gardner, Brian McCann, Didi Gregorius, and potentially Dustin Ackley all penciled in as starters next year at this point of the offseason. The Yankees also have a full outfield with Gardner, Ellsbury, and Carlos Beltran and no room for one of them to slide into the designated-hitter role with Alex Rodriguez still under contract for two more seasons.

So where would Heyward play? The Yankees could try to move one of their outfielders, but that will be a tough feat in itself. Both Beltran and Ellsbury have no-trade clauses, which leaves Gardner as the one movable piece. He would have value to many other clubs, but coming off of a poor second-half last season, now probably would not be the time for the Yankees to get the most value for him. If the Yankees somehow could move Gardner, it would leave a hole in the outfield that the Yankees would have to fill. Jason Heyward is NOT the answer.

Let’s get into the numbers. Jason Heyward batted .293 last season with an on-base percentage of .359 and a slugging percentage of .439. His OPS for 2015 was .797, this was tied for 20th in the major leagues. Players such as Adam Lind, Lucas Duda and AJ Pollock had a higher OPS last season. Heyward hit 13 home runs, tied for 60th in the big leagues, and had 60 RBI’s, tied for 49th in the majors last year. These are not numbers that jump off the page and scream 200 million dollar contract.

The Yankees have a left fielder who stole three less bases than Heyward last season, hit three more home runs, had six more RBI’s, and costs them 13 million in 2016, rather than the projected 20 million. Brett Gardner had an awful second half of the season, but his numbers were still on par with Jason Heyward in some of the most important categories. If Gardner’s second half had been mediocre, rather than terrible, he would have blown a lot of Heyward’s numbers out of the water.

If the New York Yankees are set on making a big splash this offseason, there are plenty of options when it comes to improving the offense. Justin Upton is interesting because he provides power from the right side. Upton hit 26 home runs last season, drove in 81 runs, and stole 19 bases. Like Heyward, Upton has speed but provides more power, especially from the side of the plate the Yankees need to improve on. Upton’s defense is not as good as Heyward or Gardner, which could create a problem playing in the spacious left field at Yankee Stadium. Upton is projected to receive a similar contract to the one the Yankees handed Jacoby Ellsbury, around 7 years and 150 million. Upton seems like a better fit for the 2016 New York Yankees because he is a right-handed hitter with power to all fields and he brings another dangerous power bat to the lineup.

Jason Heyward is a great player who will help any team that signs him, but he is not the best fit for the Yankees. The Yankees need to allocate their spending this offseason to a few players and try to improve the rotation, bullpen, and offense. The offseason has just begun and the Yankees will be tied to many players in the coming months. It will be interesting to see how general manager Brian Cashman and the rest of the front office go about improving the club.