Yankees Have Had 'Preliminary Talks' With Indians for SP

By NYY v BOS - November 18, 2015
Jon Morosi reports that the Blue Jays, Dodgers, and Yankees have had 'preliminary talks' with the Cleveland Indians about one of their starting pitchers. We wrote not too long ago that Cleveland might be a good trade partner in the way of Carlos Carrasco and now it appears as that may come to fruition.

Morosi mentioned a deal for a starter would likely involve an every day outfielder which is a perfect match. It's been rumored that the Yankees could (and should) trade Brett Gardner to make room for potentially Justin Upton or Jason Heyward (I prefer Alex Gordon, but I digress) and now it seems the Yankees could also pull in some much needed rotation help in said trade.


For each of 3 teams mentioned, #Indians would obtain everyday OF and part with a starting pitcher. Many scenarios in play for CLE. (2/2)
— Jon Morosi (@jonmorosi) November 18, 2015

Carlos Carrasco is an obvious candidate for Yankee interest as a result of a strong year where he posed a 3.63 ERA in 183.2 IP while striking out a whopping 216 batters. For more detail on a trade for Carrasco you can read about it here. It now appears as if the asking price for Carrasco may not be so high. Brett Gardner plus Ivan Nova and another decent-ish prospect probably gets it done.

Danny Salazar may be the better candidate however, as he's only 25 and isn't due to become a free agent until 2021. Salazar had potentially an even better year than Carrasco with a 3.45 ERA in 185.0 IP and 195 strikeouts. He will likely cost considerably more, but would also be worth said asking price. A deal would obviously start with Brett Gardner, then it gets tricky. Greg Bird fills a big need at first base for the Indians, but other than that the Yankees don't have many prospects that would line up well to fill an area of need for Cleveland. Maybe we could tout Michael Pineda as a strong replacement for Salazar? I'm not sure, but it's worth a shot. For the record, I would trade Bird and Gardner for Salazar and a young, decent prospect. 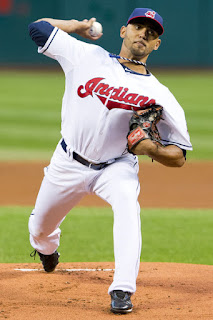 This will be a situation worth monitoring if it develops any further and we will bring you updates as soon as they happen here at BBB.