Yanks Ready to Deal Ivan Nova, As They Should Be 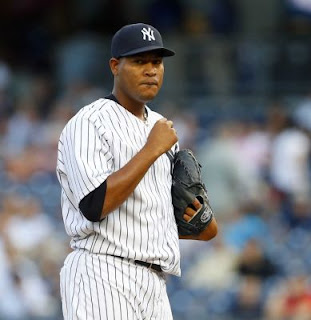 It wasn’t too long ago that every time Ivan Nova took the mound, you could feel confident in his ability to toss a solid all-around game. Fast forward to the present and Nova is a shell of his former self as inconsistency and injuries have derailed his career. A recent report from the New York Post’s Joel Sherman has indicated that the Yankees are indeed willing to trade him.


A pitcher of Nova’s caliber would be considered a number 3 type of arm, not a below average fifth starter, but definitely not an ace. Nova’s best season came in 2011 when he went 16-4 with a 3.70 ERA and WAR of 3.0. From 2011 to 2013, he averaged 26 starts per season, a terrific mark for any pitcher. However, just as he began to show his promise, Tommy John surgery prematurely ended his 2014 season. Upon his return to the majors in 2015, Nova struggled to regain his pre-surgery form as he crafted a 5.07 ERA in 17 starts with a 6-11 record.

It is no surprise to see Sherman’s report of the Yankees potentially dealing Nova. Just this past trade deadline, Brian Cashman was in touch with the Cincinnati Reds as he tried to snag ace Johnny Cueto. Ivan Nova’s name surfaced in these talks but obviously a deal never came to fruition. From this we can see that Cashman is clearly ready to deal Nova, if he can get the right piece back. Perhaps he could package Nova along with another player say, Brett Gardner, and receive a solid return. Either way, Nova is still only 28 years old and can prove his worth to a team willing to trade for him. Something to also note is that most pitchers in their first year back from TJ surgery often have trouble regaining their previous form. This is a point that Cashman has to be selling to other teams.

Ivan Nova has shown flashes of being a dependable, middle of the rotation arm for the Yankees. However, Brian Cashman’s new methodology is gaining young, controllable talent who haven’t reached their full potential. Not to say that the Yanks have given up on him, they simply feel they could get more value from a younger player with a higher ceiling. Dealing Nova could bring the Yankees back a younger piece and fit the mold of Cashman’s recent acquisitions.