Are The Yankees World Series Ready?

By Unknown - December 09, 2015
Before I get into any explaining, I’m going to answer the question. Are the New York Yankees World Series ready? They have made a few trades so far this offseason, acquiring RHP Ronald Herrera for 2B Jose Pirela, OF Aaron Hicks for C John Ryan Murphy, and the biggest trade so far, SS/2B Starlin Castro for RHP Adam Warren and SS Brendan Ryan. Castro is a nice pickup from the Cubs, solving the second base issue, and getting a young, consistent .280 hitter. While these are steps towards becoming World Series contenders, they are small steps. So that begs the question: are the Yankees World Series contenders? The short answer to this question, for now, is no. 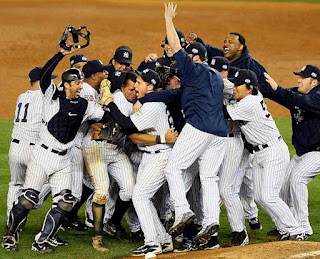 There are still many things that the Yankees need to improve on. A start would be to get rid of Brett Gardner, preferably in a trade for a starting pitcher. Gardner, Pineda and a few top prospects say Mateo and Refsnyder would probably be able to appeal to a team for a good starter. Tyson Ross is a good option from the Padres. He is one pitcher that I would like to see the Yankees target this offseason. Regardless of who it is, the Yankees need to make an improvement in their rotation.

Ivan Nova is one pitcher who should never see the mound at Yankee Stadium again. His Yankee days are over. After returning in 2015, he put up a 6-11 record on the year with a 5.07 ERA with 94 innings pitched in 17 games. His WHIP of 1.40 was actually not the worst of Yankees starters. He was in front of CC Sabathia at 1.42 and Nathan Eovaldi at 1.45.

Once the Yankees can acquire a good starting pitcher, they need to teach Chase Headley how to play third base again, because last year it looked like he had completely forgotten how to do so. He finished the year with 23 errors and a .946 FLD%, both his career worst by far. He was decent at the plate, with a .259 average and a .324 OBP. The biggest problem with Chase Headley is his defense. With 23 errors, he was the worst defender on the Yankees. He should have had even more errors, but he was lucky enough to have Mark Teixeira, a gold glove finalist, over at first base digging balls out of the dirt for him most of the season.

Are these the only things the Yankees need to do to become a legitimate World Series contender? No they aren’t but these are some big steps that the Yankees could take to get there. Then we can party again like it’s 2009, and 2000, and 1999, and 1998, and.. well, you get what I’m saying.