By Chad Raines - December 27, 2015
This offseason has been full of Andrew Miller trade rumors, but the only late inning reliever the Yankees have traded so far is Justin Wilson. Wilson had a good year in his lone season in pinstripes, going 5-0 with a 3.10 ERA in 74 games. Wilson was a perfect fit for the 7th inning and now it’s the Yankees job this offseason to replace his role. One possibility of a replacement might already be on the roster and that pitcher is lefty James Pazos. 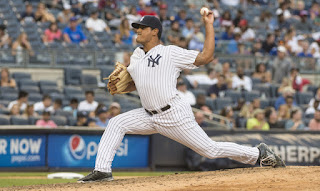 At this time last year, very few knew who James Pazos was. I personally didn’t know who he was and I follow the Yankees closer than anyone I know. During Spring Training this year, Pazos pitched 4.1 innings while allowing one run on two hits, two walks, and six strikeouts. Pazos of course didn’t make the team out of Spring Training and started the 2015 season in AA where he pitched to a 1.86 ERA in six games. After a brief stint in Trenton, Pazos moved up to AAA Scranton/Wilkes-Barre and didn’t disappoint, pitching to a 1.09 ERA in 21 games. Pazos proved to be a strikeout machine as he averaged 10.3 strikeouts per nine innings across both Trenton and Scranton/Wilkes-Barre. As a reward for his terrific season in the minors, Pazos was a September call up and made his debut on September 5th, pitching two-thirds of an inning and picking up a strikeout. Pazos finished his first taste of the Major Leagues pitching in 11 games, not allowing a run on three hits, three walks, and three strikeouts across five innings.

Pazos has proven he can strike hitters out as he has averaged 9.6 punch outs across four minor league seasons and has shown to keep the ball in the yard as well, averaging 0.2 home runs allowed per nine innings in the minors. Some things to look out for though is that he has shown to be hittable (6.7 hits per 9 in minors) and to allow walks (3.3 BB per 9). Although there could be room for improvement, Pazos’ track record shows that he can be a big piece in the Yankees bullpen for the future and if he can recreate what he has done in the minors, the 7th inning role is not out of the question.