My Fellow Yankees Fans: Welcome To The New Normal

By Unknown - December 04, 2015
As the days get colder and the nights get shorter, many would expect the hot stove to heat up in the Bronx. That would be a wholly mistaken assumption. The days of George Steinbrenner’s spending sprees are a distant memory, therefore those fans expecting the Yankees to make their signature free agent splashes are holding out false hope. The Aaron Hicks trade will the most significant move of the offseason. You heard it right here first folks. Since many of our writers are contemplating possible moves the Yankees can make to improve for the 2016 season, I won’t engage in such conjecture. I have finally come to accept that the Yankees will be mediocre for the immediate feature. With an apathetic owner and an incompetent general manager running the show, I have no reason for optimism. For purposes of this article, I will focus much of my attention on the former, because I believe the problem in the Bronx is one of systematic proportions. My prediction is as follows, the Yankees will make no significant moves this offseason, and we will be stuck with yet another average team in 2016. 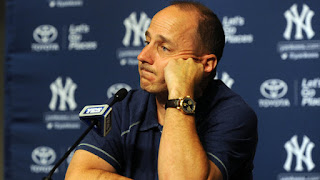 Following the spending spree of the 2013 offseason, in which the Yankees signed Jacoby Ellsbury, Masahiro Tanaka, and Carlos Beltran, I developed a sense of false hope in the younger Steinbrenner; however last season’s trade deadline was evidence enough for me to see his true game plan. The Yankees problem has not been the albatross contracts, but rather that those contracts have been given to the wrong players. Instead of shelling out $153 million for the injury prone Jacoby Ellsbury, the Yankees would have been much better served had they tried harder to retain Robinson Cano, who is reportedly unhappy in Seattle these days. Hal lacks the drive and passion that motivated his father, and is obviously much more fiscally conservative. I’m not saying that’s a bad thing, however jeopardizing the chances of winning is deeply troubling. The restraint displayed at last year’s trade deadline cost the Yankees a legitimate shot at a championship, therefore simply thinking about it makes me livid, but I’ll digress because I’ve covered already covered this in great detail. I am no fan of Brian Cashman, however we must realize that he cannot act with Hal’s approval.
After the 2016 season, Mark Teixeira and Carlos Beltran will be off the books, with CC Sabathia and Alex Rodriguez following them in 2017. That leaves us with two years of no substantial moves being made to a deeply flawed team. The Yankees are the most valuable sports franchise in the United States so money should not be an inhibitor to putting a winning product on the field. Since Hal truly does prioritize his bottom line, as any smart businessman would, he must understand simple economics. The better the product on the field, the more money he makes. It’s no secret that attendance at Yankee Stadium has been on the decline the last couple years, and with the retirements of Mariano Rivera and Derek Jeter behind us, we saw many empty seats in 2015. I can tell you from the games that I went to last year, there was a lack of passion in the building that really troubled me as a dedicated fan. This trend is only set to continue, considering next year’s team will likely be very similar to the team that pathetically got three-hit in the AL Wild Card game last season.
This Yankees team is one with many holes. They have a starting rotation full of question marks, an anemic offense, and aside from the three guys at the backend, a circus of a bullpen. Albert Einstein once defined insanity as “doing the same thing over and over again and expecting a different result.” This is the scenario facing the Yankees this offseason. Look, I’m not expecting Brian Cashman to snag a top free agent, however the team must be improved. Trading Brett Gardner, who obviously couldn’t produce in the second half if his life depended on it, for some pitching, would be a nice start. Bringing aboard a utility guy who has that indispensable clutch gene, such as Ben Zobrist or Martin Prado, would also be helpful. Signing a right-handed power bat for left field, such as Justin Upton, would also be a remarkable improvement. These moves may make all the sense in the world to us as fans, however there is much more involved in the decision making process.
Brian Cashman, who might as well be named GM for life because it is virtually impossible for him to be held accountable for his past mistakes, will likely stay quite this winter. Maybe he might make a move comparable to the acquisitions of Nathan Eovaldi and Didi Gregorius last offseason, however expecting anything more would be foolish. It aggravates me as a fan of the most prestigious sports franchise in history that management is so apathetic towards the conspicuous holes that this team has. Considering no offensive player, with the notable exception of Carlos Beltran, and Greg Bird (who likely won't even be on the big league roster next season, or at least not until Teixeira inevitably gets injured), produced after August last season, there should be an overhaul. The contractual obligations make that difficult, however the Yankees have to upgrade where they can to improve their chances in 2016. Left field, as already discussed, and second base, are the two obvious areas for improvement. I, like many other fans, would like to see Rob Refsnyder get a chance. Dustin Ackley also impressed during his September games with the club. Starting Stephen Drew last season was so disgraceful that somebody in the front office should be fired for allowing such a travesty to occur for so long.
As other teams are maneuvering to improve their rosters, the Yankees are sitting back and doing nothing. As we discovered at last year’s trade deadline, complacency is a losing strategy. As Yankees fans we have come to expect the best, and we should not relinquish our high expectations, regardless of the message conveyed by the frugal owner. Unfortunately, I have no reason to believe the ship will be righted. Writing about the possibility of any meaningful move at this point would be hopeless conjecture. It is clear to me, as it should be to any reasonable fan, that the Yankees have lost that desire for greatness that made them such a driving force in the sports world. So, my fellow Yankees fans, I would like to welcome you to the new normal. This is a normal of complacency. This is a normal of inaction. This is a normal that will eventually lead to losing. This normal will provide us with a mediocre 2016 and beyond, unless Hal realizes it is in his best economic interest to put a World Series contender on the field at all costs.