By Unknown - December 06, 2015
According to recent reports by MLB Trade Rumors and Bill Ladson of MLB.com, the Washington Nationals are expected to shop Drew Storen during Winter Meetings, which start tomorrow (Monday, December 7) in Nashville, Tennessee. The Nationals may make Storen available due to Jonathan Papelbon’s current role as closer, which makes Storen their seventh or eighth inning man. He had a rough stretch in August where he lost his role as closer and then broke his thumb by slamming a locker room door on it after losing his closer role. Although the Yankees currently have an above average bullpen, headlined by Dellin Betances and Andrew Miller, adding Drew Storen would not be a bad idea as long as it doesn’t cost the Yankees too much. Storen would fit nicely within the Yankees pen right now, creating a deadly Storen-Betances-Miller trio, with Justin Wilson, Adam Warren, and potentially Chasen Shreve anchoring the rest of the pen. This would allow flexibility for bullpen usage, as Betances is consistently inefficient in his outings and with the inability of Yankee starting pitchers to go for more than six innings. 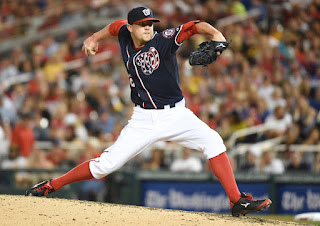 Drew Storen’s season in 2015 was a tale of two halves. Storen pitched to a 1.68 ERA from Opening Day until July 30, appearing in 40 games, throwing 37.4 innings, and only allowing 7 earned runs. He struck out 48 batters while only walking 9 batters. But after the Nationals traded for Jonathan Papelbon and took over the closer role, Storen’s season fell apart. His August ERA was a horrific 8.49, allowing 12 hits and giving up 11 earned runs in 11.2 innings. From August 7 to August 15, in four straight outings, he gave up 10 earned runs in a mere 3.2 innings (28.12 ERA) and that caused his ERA to exponentially increase from 1.52 to 3.40. He did not improve too much in September either, allowing 3 earned runs in only 5 innings before breaking his thumb in the locker room and ending his year.

Because Storen has struggled heavily with Papelbon’s presence in Washington, it doesn’t seem like it would cost the Yankees a lot for them to trade for him. However, Storen would not be the closer in New York, especially with Andrew Miller still in the Bronx. Storen would most likely be the seventh-inning man, coming in before Betances or alternating appearances with Betances if Betances was unavailable. Because of his horrendous performance in August after being replaced as the closer, I am concerned about his ability to pitch in a non-closer role. Storen pitched extremely well in the beginning of 2015 but he was the closer. He may be one of those pitchers that is only dominant as the closer. With the Yankees needing flexibility in the pen, he may not be a good fit unless he were to commit to not closing and be okay with that role.

However, in 2014, Storen was not the closer until September. Storen pitched to a first-half ERA of 1.20 in 2014, striking out 21 batters in 29 innings while giving up only 4 earned runs. In the second half of 2014, he was also not the closer until mid-September. In his 15.3 innings in the second half before taking over the closer role, he pitched to a 1.76 ERA, equally consistent with the first half. He closed off 2014 in dominant fashion after taking over the closer role, throwing 20 consecutive scoreless innings to end the season and 10.1 of those as the closer. Storen converted all 10 of his save opportunities and was efficient, throwing more than 15 pitches only 9 out of his 24 appearances.

On July 31, 2015, Storen, his agents, and the Nationals met in New York City. Although nothing specific came out of the meeting, many assumed that Storen wished to be traded. However, whether he wanted to be traded to become the closer for another team or simply to another team is unknown. With Darren O’Day unlikely to sign with the Yankees, Drew Storen would be a good add; however, the Yankees cannot give up too much. Additionally, Storen must commit to a non-closer role. In fact, that is my only hesitation with Storen - his inability to perform when he is not the closer. There has been proof for both sides of the argument - he pitched extremely well in 2014 when Rafael Soriano was the Nationals closer but then pitched terribly in late 2015 when Papelbon took over. If Storen ends up in the Bronx, look out for the deadly Storen-Betances-Miller trio.