By Chad Raines - December 13, 2015
Is there a better bullpen duo in baseball than Dellin Betances and Andrew Miller? Probably not. Another duo that is amongst the best in the MLB is Kelvin Herrera and Wade Davis. But do you remember when the Royals had a big 3? The other member was closer Greg Holland who was non-tendered by the Royals recently and is now a free agent. Certainly there will be numerous clubs in the mix for Holland, but his story has a twist to it. He will not be able to pitch in 2016 because he underwent Tommy John surgery late in 2015. 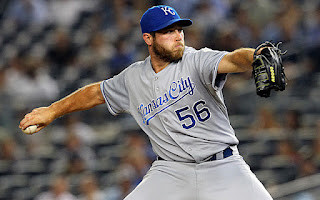 Considering he won’t be back until 2017 many clubs will hold back from signing him. The Pinstripers, however have signed a player who was set to miss the following season, just a few winters ago. They signed Andrew Bailey who also was coming off of Tommy John surgery to a 2 year deal. He went on to miss all of 2014, and did not pitch until the second half of 2015 being far from effective. So we’ve seen a move like this backfire on the Yankees before but we can only hope Brian Cashman is willing to take a chance one more time.

Greg Holland was once considered a top 5 closer with some thinking of him as the best in the game. Last year turned out to be the worst of his career but he dealt with an elbow injury for a large portion of the season which certainly affected him on the mound. From 2011-14 his ERA’s were 1.80, 2.96, 1.21, 1.41 while pitching over 60 innings each year. Along the way he had two 90 strikeout seasons and one 100 strikeout season with 46 and 47 saves his two years as the closer. In 2013 and 2014 he was an All Star and finished 9th in the CY Young voting.

The Yankees bullpen had great numbers but besides Betances, Miller and Wilson there wasn’t much effectiveness. Chasen Shreve fell off in the second half, Adam Warren bounced back and forth from the rotation to the bullpen. Guys like Pinder, Rumbelow, Goody, Moreno, Pazos and Cottham all made their Major League debuts but neither showed much promise. Signing Holland would be a move for 2017 but could pay dividends if he recovers and approaches his old form. To put it simple: it’s low risk, high reward situation.