By Chad Raines - December 21, 2015
When the Yankees included Brendan Ryan in the trade that landed them Starlin Castro, most Yankees fans were more than excited to see Ryan gone. But in getting rid of Ryan, the Yankees got rid of their only legitimate backup third baseman. They could try Castro, but he has seven games of third base experience, all in the minors. They could try Refsnyder, but the Yankees don’t seem willing to make him learn third when he’s still trying to transition to second. The Yankees also don’t have any legit third basemen waiting in the minor leagues and the free agent market is pretty thin. Even with a thin market, a free agent I do think the Yankees should target is Juan Uribe. 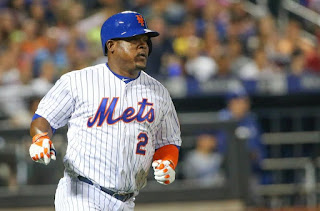 During the 2015 season, Uribe spent time with the Dodgers, Braves, and Mets and hit .253 with 14 home runs and 43 RBI in 119 games between the three teams. All in all, at age 36, Uribe can still hit and can still play a respectable third base. Uribe could be used to spell Chase Headley when he needs a day off and could be a dangerous bat off the bench in a pinch hit situation. Uribe should be relatively cheap and on a one year deal so there shouldn’t be any long commitment, not at Uribe’s age anyway. Either way the Yankees need someone else who can play third base and I think the best option is to sign Uribe.