By Chad Raines - December 28, 2015
The Yankees have acquired left-handed closer Aroldis Chapman from the Cincinnati Reds for minor league right-handers Caleb Cotham and Rookie Davis as well as infielders Eric Jagielo and Tony Renda. Despite Chapman only being under control for one season and potentially serving a suspension for his domestic violence allegations, this appears to be a steal for the Yankees. 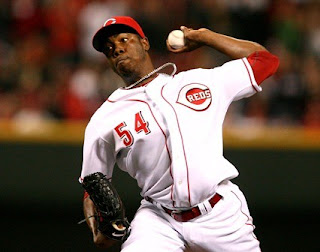 Although Chapman may not be my favorite human being in the MLB (for obvious reasons), it is impossible to deny his talent. With a fastball that regularly clocks over 100 MPH as well as a back breaking slider, the Cuban Missile was one of the most dominant closers in 2015 going 4-4 with a 1.63 ERA converting on 33 of 36 save opportunities with an unbelievable 116 strikeouts in 66.1 innings. Chapman has posted a career ERA of just 2.12 and a WHIP of 1.02, and opposing batters are hitting .154 off him during his career.

At first glance, the Yankees do not appear to have given up much for Chapman, likely due to his one year of team control and pending allegations. Caleb Cotham was part of the revolving door of Yankee minor league relievers to see big league innings. Cotham was less than stellar going 1-0 with an ERA of 6.52 in 12 appearances across 9.2 innings. The departure of Cotham will not affect the Yankees in the long run.

The other pitcher the Yankees gave up is the one that is the centerpiece of the deal. Right-hander Rookie Davis was a prospect on the rise in the organization who was probably going to crack most top-10 prospect lists in the Yankee organization. As a career minor leaguer, the 6’5” 22-year-old posted a 19-20 record with a 3.90 ERA in 72 appearances including 63 starts. Davis hasa the upside of a possible number 3 starter in the bigs, so as a guy who is the centerpiece of a premier deal, this deal looks very good for the Yankees.

Eric Jagielo was a prospect in the Yankees farm system who was losing his relevance each time he stepped on the field. As a guy who was once regarded as one of the Yankees top prospects, Jags has been declining ever since as it is unclear what position he would play in the majors. Currently a 3rd baseman, the Notre Dame product and former first round pick has a career minor league slash line of .266/.356/.469 with 33 homers and 120 RBI in 204 games. Jagielo’s slight resurgence in 2015 raised his value ever-so slightly and allowed the Yankees to include him in this blockbuster.

Finally, the Yankees parted ways with infielder Tony Renda whom they acquired from the Nationals last year. The California Berkley product and 24-year-old infielder has posted solid numbers in the minors, but has virtually no power. At just 5’8”, Renda posts a career slash line of .285/.360/.366 in 440 minor league games. He has just 6 homers compared to 9 triples and 87 stolen bases in 107 attempts. He is a slightly above average fielder and with his current set of tools, it is unclear if he will ever make it to the big leagues as he simply does not project to be much.

Implications
With the Yankees departing with 4 solid, but low to mid projecting prospects to acquire one of the top relievers in the game in Chapman, this is a deal for the Yankees and its fans to get excited about. The census around the league is that Chapman is expected to serve a suspension in 2016, although the length is far from being determined. The Yankees will also likely look to sign Chapman to an extension next offseason as this is the final year of his contract. The bottom line is: the bridge of Dellin Betances, Andrew Miller and Aroldis Chapman is the best in the MLB, and that’s essentially indisputable. Amongst relievers strikeouts per 9 innings, Chapman was first at 15.74, Miller was second at 14.59 and Betances was third at 14.04 and they now all play for the New York Yankees. Although Miller may be traded (although I hope not), the Yankees are looking at shortening games to 6 innings with these three, which should help a ton on a rotation that struggled to get deep into games at times in 2015.

Above all, with the acquisition of the Cuban Missile, Aroldis Chapman, the Evil Empire has lived up to its nickname, but it’s something us Yankee fans alike should be incredibly excited about.