By Unknown - December 05, 2015
You’ve heard it all this offseason. The Yankees need a starter, second baseman, a new outfielder, and help for Dellin and Miller. You’ve heard proposals, ranging from trades for starting pitching, to signing Ben Zobrist, or promoting Aaron Judge to the Bronx. But simply put, there are way too many needs for the Yankees right now to satisfy all of them. The Yankees are no longer willing to drop check after check to solve the team’s issues and it seems like our GM Brian Cashman is complacent with where the team is currently. Just a couple of days ago, he said the Yankees would more than likely keep Brett Gardner and Andrew Miller. The Miller part is okay, but saying that arguably our biggest trade asset, Brett Gardner, was going to stay in the Bronx, did not sit well with me. This offseason, two of our biggest needs are in left field and starting pitching. The Yankees struggled down the stretch with Brett Gardner’s typical second-half slump and the lack of reliable starting pitching. 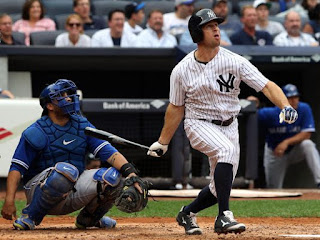 Left Field
Brett Gardner had a great first half, hitting .302 with 22 doubles, 10 HRs, and 42 RBIs. He was even part of the Final Vote, but actually made the team because Alex Gordon was injured prior to the game. But then the second half came, and he hit .206, with only 4 doubles, 6 home runs, and 24 RBIs. His batting average dropped month-by-month, hitting .208 in August, .207 in September, and .143 in October. He had five stolen bases in the second half after stealing 15 bases in the months from April to June. For someone who was paid $12 million last year and played 151 games, relatively injury-free, this is absolutely unacceptable.

Even before last year, his problems in the second half of the year were very apparent. In the last three seasons, he has hit .284 pre-All Star game and .229 after. And even worse, he seems to peak around June, every single year. His batting average in the last three years in the month of June have been over .300; after that, his batting average per subsequent month drops - .256, .220, .214, and .143 in July, August, and September. In the American League East, where the division seemingly becomes more bunched up every year, the Yankees need a reliable option in left field who can play consistently well throughout the second half and not bottom out in June and never recover afterwards.

Starting Pitching
Currently, the Yankees rotation for next year looks something like: Masahiro Tanaka, Luis Severino, Nathan Eovaldi, Michael Pineda, and CC Sabathia. Adam Warren and Ivan Nova figure to compete in Spring Training, but seeing as Warren couldn’t crack the rotation last year, I don’t see him making one of the two possible spots, which are held by Pineda and Sabathia right now. Unlike the situation in the outfield where Gardner is the only tradeable asset, both Pineda and Nova have been linked to trades, but recently, Ivan Nova’s name has been tossed around in potential trades. The main issues with this rotation are Pineda’s inconsistency and Nova’s problems with recovering from Tommy John surgery. I won’t get into Tanaka’s elbow, because that seems to be an overblown issue in which I hope gets resolved this winter as he returns to Japan for his throwing program. I will also not speculate on Sabathia’s personal health; I wish him the best of luck. That still leaves two issues. 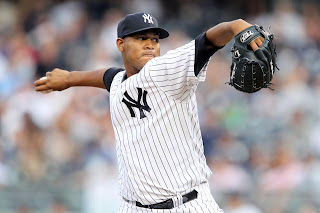 In the first half, Nova had a reasonable 3.42 ERA, but in the second half, his ERA soared to an unacceptable 5.63. His ERA at Yankee Stadium was beyond comprehension with a 6.17 ERA. After returning from surgery, his monthly ERA grew exponentially from 1.50 in June to 6.20 in September. Nova is a tradeable asset so he’s the first pitcher I would consider moving in a package. 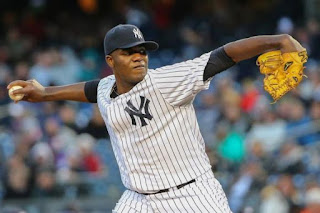 Pineda missed about a month starting at the end of July, but his second half ERA was also an unacceptable 5.80 ERA. After his July 10th outing against Boston, he didn’t pitch past the sixth inning once. His inability to leave runners on base is highlighted by batters hitting .325 off of him with runners in scoring position. In three critical outings against teams in the AL East (September 7 vs Baltimore, September 12 vs. Toronto, and September 29 vs. Boston), his ERA was an incredibly high 7.89. Similarly to Brett Gardner, his issue seems to be peaking around the Midsummer Classic and spiraling downward after.

Even though both Nova and Pineda struggled immensely in the second half, Nathan Eovaldi righted the ship. His injury hit the Yankees hard when he went down in early September. Although he relied on over seven runs of run support per outing, he improved in the second half with a combined 3.40 ERA in August and September. He gave up 12 hits in July and 13 hits in August over 66.2 innings; additionally, he gradually struck out more players month-by-month. And even though he didn’t pitch his best all the time, the Yankees won in 11 out of his last 14 outings. However, he is also a question mark because of his inconsistency from outing to outing. Because he will be in the rotation starting next year, the Yankees need him to deliver quality outings every five days.

Verdict
It’s certainly an extremely close contest - Brett Gardner could not produce at the top of the lineup, leaving power hitters like Mark Teixeira (prior to his injury), Alex Rodriguez, and Brian McCann with the bases empty. Additionally, unreliable starting pitching with Ivan Nova and Michael Pineda hurt the Yankees as well. However, the most pressing need for the Yankees is starting pitching. With so many question marks in Sabathia, Nova, and Pineda, and potentially with Eovaldi, the Yankees desperately need a reliable starting pitcher who can give the Yankees a solid six- or seven-inning outing every time. The most ideal way to solve this would be to flip Brett Gardner for a #3 or #4 starting pitcher in a package and then sign Justin Upton or Alex Gordon, both of whom will not be as expensive as Jason Heyward.

In terms of specific solutions to this issue, I don’t want to repeat what my colleagues at BBB have said, simply because they have written some great articles to which I wholeheartedly agree on how to solve these issues. Here they are: