Finally, Yankees GM Brian Cashman made his first big move of the offseason as he acquired Chicago Cubs SS Starlin Castro in exchange for P Adam Warren and Utilityman Brendan Ryan. This trade looks to be a good one for the Yanks and for more information on the specifics of the deal and analysis, refer to the BBB’s rapid reaction on it BBB's rapid reaction on the Starlin Castro trade. Even though the Yankees have found their new second basemen, the deal leaves both Dustin Ackley and fan favorite Rob Refsnyder as options in the infield. It’s becoming clear that someone will have to go. 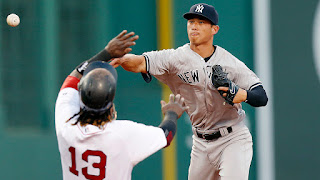 Going into the offseason, it was believed that the Yankees would head into the 2016 season with a platoon of Refsnyder/Ackley at second base. This option seemed less than ideal, but promising. Refsnyder flashed his “major league ready” bat as he had an impressive slash line of .302/.348/.512 in 16 games, a small sample size but encouraging nonetheless. Ref even made some highlight reel plays at second, showing how his glove work was not as bad as advertised. Dustin Ackley was the Yanks lone deadline acquisition but proved to be worth it, as timely home runs and his positional versatility were extremely valuable to the team. With no clear spot for Refsnyder on the roster, the Yankees have a few options.

Option #1: Trade Him
Starlin Castro is now the Yankees clear cut, everyday starting second baseman. It is almost guaranteed that Dustin Ackley will be the backup at 2nd especially considering how Joe Girardi likes having guys who can play multiple positions. Refsnyder is young (24) and has a reputation for being a selective and patient hitter. Pairing him with other pieces such as Brett Gardner or Ivan Nova would definitely net the Yankees the starting pitching they have coveted this offseason. Not to forget, Refsnyder was originally an outfielder in high school and college, so Brian Cashman could sell the point to other teams that he is not limited to second base. It wouldn’t make sense to keep both Ackley and Refsnyder on the roster, so the Yankees could also look to…

Option #2: Keep him in AAA
At this point, Refsnyder would have to be feeling let down. Thinking he had a shot at the 2016 2nd base job, he along with his major league ready bat are down in the minors. This is a lot like 1B Greg Bird’s situation, as Mark Teixeira is the obvious starter. However, if Refsnyder were to stay in Scranton, he could get some more reps at 2nd to improve his glove. He could serve as depth if an injury were to happen to either Castro or Ackley. If not these two choices, the Yanks could somehow…

Option #3: Keep him as the backup
This is a very, very unlikely possibility. As previously mentioned, Girardi is almost guaranteed to choose Ackley as the backup 2nd basemen. However, if he went down with an injury in spring training or simply didn’t produce, that would leave Refsnyder as the next best option to be the backup. Perhaps Refsnyder has a monster spring training and they find a way to keep him on the Major League club.

Out of all these possibilities, I believe the Yankees will trade Ref before spring training begins. I just don’t see a logical spot for him on the Major League roster, as Dustin Ackley will provide the versatility that Joe Girardi covet’s. Stashing Ref at Triple A at this point really would do him no good, as on most other teams he could be a starter or a viable backup. Clearly the Yankees don’t trust him with the starting role, even though the opposite was stated earlier in the offseason. Personally I always thought Refsnyder deserved the chance to be the starter but Starlin Castro is the superior option and Refsnyder appears to be the odd man out.

What do you think the Yankees should do with Rob Refsnyder? Leave a comment or talk to us on Twitter!