The State of the Bullpen

By Unknown - December 13, 2015
I'd like to preface this article by thanking Brian Cashman for refraining from trading Andrew Miller. Throughout most of the 2015 season, the back end of the Yankees bullpen was the team's biggest strength. This week we've witnessed a depletion of the aforementioned strength. At the winter meetings, Brian Cashman included Adam Warren in the trade for Starlin Castro. He also moved Justin Wilson to the Tigers for two minor league starters. Although I've always liked Adam Warren, and think he can make it as a starter, this is a move the Yankees had to make. Acquiring a former all-star who is as talented as Castro, not to mention only twenty-five years of age, is an opportunity that can not be passed over. After the grueling experience of watching Stephen Drew at second base for a year and a half, I'm ecstatic to see a competent player man the position. The Wilson trade left me quite perplexed, unless it's part of something larger. That being said, I won't rush to judgment on that front until we see how the bullpen shapes up. The Yankees are now left with only two dependable arms out of the bullpen: Andrew Miller and Dellin Betances. While that 8-9 formula is one of the best in the league, getting the ball to them figures to be problematic, especially considering that the starting rotation, as currently comprised, does not appear as if it will be providing much depth. 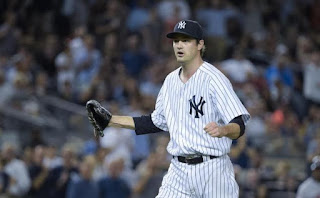 The bullpen as it stands now:

As previously discussed, the Yankees have a lethal combination to close out games, however by trading away the team's two best middle relievers, Brian Cashman created a vacuum. After seeing the likes of Caleb Cotham, Nick Goody, Branden Pinder, and Bryan Mitchell attempt, and fail, to provide adequate middle relief help, I'm not optimistic about internal options. Although most of the blame for last year's second half collapse has been placed on the anemic offense, and deservedly so, the bullpen, with the exception of Warren, Wilson, Betances, and Miller, was God awful in the second half. I began to wonder how some of these guys even made it to the major leagues. With starters who struggle to go even six innings into the game, having a competent bridge to Betances and Miller is imperative. This was regularly referred to as the "Bridge to Mariano," for many years. Now, we need a bridge to Betances and Miller.

The one wild card to the equation is Chasen Shreve. Acquired from the Atlanta Braves, along with David Carpenter, who was an utter bust, for Manny Banuelos last offseason, Shreve was a pleasant surprise in the first half of the season. In fact, a case could have been made that Shreve deserved to be an all star. Shreve appeared to be gassed in August and September. It seemed as if every time Girardi brought him into the game he was getting smacked around by the opposing lineup. He looked so bad at the end of the season that bringing him into the game was the equivalent of waving the white flag. Aside from Shreve, James Pazos and Jacob Lindgren will likely be in the mix as well. Pazos was essentially the only reliever called up in September who wasn't awful, so he should be given a shot. Drafted in 2014, Lindgren made it to the big leagues early last season, but the fireballer's stint in the majors was cut short by an elbow injury. If Shreve can regain his first half form, coalesced with strong showings from Pazos and Lindgren, I'd feel much more confident in the middle relief department.

What must be done:

Even in the best case scenario, the internal options for middle relief are not too appealing. The Yankees need to add at least two more competent relievers, whether it be via the trade market or free agency. Acquiring effective middle relievers for players who won't have an impact on the major league roster is a formula Cashman should be looking following from last offseason. Although Francisco Cervelli had a great year with the Pirates in 2015, there was simply no room for him on the Yankees roster. Wilson got huge outs in key spots last year, which furthers my confusion as to why he was traded for two minor league starters who won't have an immediate impact.

I wouldn't object to pursuing a free agent reliever such as Tyler Clippard. Due to the financial constraints initiated by Hal Steinbrenner, such a reliever may be out of the Yankees price range. I still can't believe I'm actually saying that. Despite his recent domestic abuse troubles, I would still take a shot at Aroldis Chapman, assuming that he won't be facing possible legal repercussions for his actions. I understand this is a long shot, however the 7-8-9 combination to close out games would be absolutely filthy. Most likely, the Yankees will have have to make a couple low-risk, high-reward moves and hope they can catch lightening in a bottle with a few of them.

By drastically improving the team at second base, Cashman made the bullpen, which had been a strength, into a potential weakness. Castro's acquisition was much needed, however the Wilson trade doesn't make much sense, unless, as stated earlier, it's part of something bigger. Nonetheless, the Yankees need to do something in terms of middle relief, or else the team will end up blowing many leads in 2016. Since the Yankees likely won't add a starter who can consistently pitch six innings, middle relief becomes the only other avenue of improvement. I haven't a clue what Cashman has up his sleeve, however I have a feeling it will come via the trade market. Adding two effective relievers to supplant the voids created by the departures of Warren and Wilson will reinforce what had been our biggest strength in 2015.