The state of the rotation

By Unknown - December 20, 2015
After providing a comprehensive look at the Yankees recently weakened bullpen, I decided I'd write a sequel of sorts regarding the starting rotation. Thus far, the Yankees haven't made any moves to improve one of the roster's most overt weaknesses. In fact, it was further weakened by trading away Adam Warren for Starlin Castro. Warren provided much needed depth, however it was unlikely he would begin the season as a starter anyway. Currently, the Yankees rotation has a number of question marks. Below, I will give a profile on each starter, along with what can realistically be expected out of them in 2016. That being said, it's painfully obvious that this team is in dire need of a consistent starter or two. For this reason, I will also provide a brief analysis on what I believe the Yankees must do this offseason in order to get better in this department. None of our current starters can be counted on for consistency, therefore it is imperative that Brian Cashman strengthen this glaring weakness with some much needed improvements. 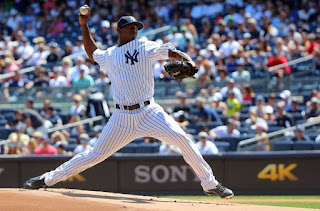 Masahiro Tanaka: After being given a contract worth $155 million dollars over seven years, Tanaka had an immediate impact before getting hurt about midway through the 2014 season. Ever since returning from his injury, Tanaka simply has not been the same. Although most experts suggested that Tanaka proceed with Tommy John surgery, he was able to prove his detractors wrong by performing relatively well in 2015. While Tanaka performed well in 2015, he was nowhere near the ace that we expected him to be following the big money contract Cashman dished out two years ago. Tanaka's primary weakness has been the long ball, and considering he pitches most of his games at homer-friendly Yankee Stadium, this is very concerning. At times, Tanaka has looked like a home run machine.

Looking ahead to 2016, it's evident that Tanaka cannot be counted on to be the ace we all wanted him to be. As we are all aware, Tanaka is a pitch away from having to undergo Tommy John surgery. It's also a safe bet that he will get injured at least once next season. Realistically, if he can stay healthy, I would expect him to perform at the same level he did in 2015. It's becoming painfully clear that the impressive start to his major league career can be attributed more to the league's lack of familiarity with him, as opposed to his raw talent. Although he did display flashes of dominance in 2015, they were often followed up with the surrendering of a number of home runs. In terms of production, he projects to be a number three starter in 2016. It looks like Brian Cashman was correct when he originally predicted that Tanaka would realistically be a number three, however that raises the more pertinent question of why he would give $155 million to a number three starter in the first place...

Luis Severino: Out of all the options for the starting rotation currently on the roster, I have the most faith in a guy who is only a year and half older than me. That not only speaks volumes about Severino's talent, but also the weakness of the entire starting staff. After being called up in early August, Severino showed us why he has been so highly regarded on prospect lists. Unfortunately, the Yankees should also expect a sophomore slump of sorts from Severino. It's also likely that he will only get better with time, however, as we have learned in years past, the best course of action is to hope for the best, but be prepared for the worst. The Yankees do not have an ace, but Severino is the closest thing we have to one.

Reports have also circulated indicating that Severino may be on an innings limit in 2016. I completely disagree with innings limits on principle because there is no tangible evidence that it decreases the chances of injury, however for the purposes of this piece I digress. With this reality in mind, we should expect the Yankees to skip a number of Severino's starts next season when they can. While Severino has the most upside, counting on him to anchor this rotation is not something I'd be willing to do at this point, however I wouldn't be surprised if he improved upon his impressive rookie campaign.

Michael Pineda: I have to say that Michael Pineda is by far one of the most frustrating players to watch on the Yankees roster. While he can be downright filthy in one outing, he often follows it up by turning in a lackluster performance. Keeping in mind that Jesus Montero has been a complete bust, it's fair to say the Yankees have already won this trade. I've advocated for the Yankees to trade Pineda a number of times, and I still stick by this conviction. It's reasonable to say that Pineda's stock will not get higher than it is right now. His laundry list of injuries, inability to perform in the second half, and overall inconsistencies are not a formula for success.

Pineda truly has the talent to be a number one pitcher, however he is already 26 and I have no reason to believe he will finally figure it out this season. Barring injury, which is also highly likely, I expect Pineda to repeat his 2015 performance for the most part. Expect a dazzling start to the season, followed by the usual let down. If Pineda can finally take the necessary steps forward to develop into the dominant pitcher we all know he is capable of becoming, he will be a force to be reckoned with at the top of the rotation. The aforementioned conjecture, unfortunately, is nothing more than wishful thinking.

C.C. Sabathia: It's great to see that Sabathia is finally getting his life back together after a brief stay at an alcohol rehabilitation center. His second half turn around last season was very encouraging, but expecting him to build off of this may be unrealistic. Sabathia will never regain his former form, and the Yankees are likely stuck with him for the next two years. He is a number five starter at best at this point in his career, however his leash should shorter this year than it was last. The Yankees lost a number of games because of Girardi's refusal to remove CC from games prior to his imminent implosion. This mistake cannot be repeated in 2016. At this point, I consider CC a wild card. As I said with the Tanaka, Severino, and Pineda, we should expect the best case scenario, but also be prepared for the opposite to occur.

Nathan Eovaldi: Similar to Pineda, Eovaldi is extremely difficult to watch. He definitely has the stuff to be a dominant starter, but has yet to consistently perform at a high level. He also gives up A LOT of hits. It is encouraging that these hits are often singles, rather than home runs like Tanaka, however still very problematic. I actually believe Eovaldi could be an elite arm out of the bullpen for the Yankees, but I highly doubt they take that approach. Hopefully, Eovaldi can improve upon his progress last year, and become a consistent member of the rotation. The Yankees also seemed to score a lot of runs when Eovaldi was on the mound, so as long as that run support persists into 2016, I have no problem running him out there every five days.

Ivan Nova: With all due respect, Ivan Nova is awful. I wouldn't have even tendered him a contract. Nova has been with the Yankees since 2010, but has yet to figure it out. I know many of his apologists will argue that his poor performance last year was a result of coming off Tommy John, however poor performance has been a consistent theme of Nova's entire career. If the Yankees start him this season, they will be wasting a valuable roster spot. Hopefully they can trade him for a serviceable reliever, however I doubt a team would even give up that much for him.

Concluding thoughts: Similar to last year, the Yankees rotation is one filled with question marks. In a best case scenario, they could have three to four dominant pitchers, however the reality of that coming to fruition is highly unlikely. The Yankees need to add one or two starters who can consistently pitch six innings. Due to the financial constraints facing the team this offseason, it will likely be via the trade market. Although I assessed six starters, I do not expect them all to make the cut. In an ideal world, I would trade Nova and Pineda, and buy out CC, but we all know that won't happen. Most likely, the Yankees will add at least one additional arm. Considering Nova is already the odd man out, that may open a slot for Pineda to be traded, however the injury history of this current bunch may inhibit that from occurring. To put this rather bluntly, unless the Yankees add one or two consistent starters, they are just asking for bad results in 2016, especially with the newly weakened bullpen. A rotation plagued with injury history and inconsistency, as ours is currently comprised, is no recipe for success.