The veterans who can make or break the 2016 Yankees season

By Unknown - December 27, 2015
As was evidenced by last season's outcome, the fate of the Yankees ultimately rests on the shoulders of the overpaid veterans that many fans have become accustomed to complaining about. It is no surprise that the resurgence of Alex Rodriguez and Mark Teixeira fueled the Yankees offense, and helped propel the team into first place up until early August. Following Teixeira's inevitable injury, and Rodriguez's decline in production, the entire Yankees offense followed suit. I've identified six veteran players whose production is essential to a successful 2016 season. This is not to say that the younger players are not as important, however the threat of injury and lack of production from the six players I've singled out will go a long way in determining whether or not the Yankees can make a return to the playoffs. Considering the amount of money tied up in these six players, it is essential that they play to their fullest ability, or we will be looking at yet another dark October in the Bronx. 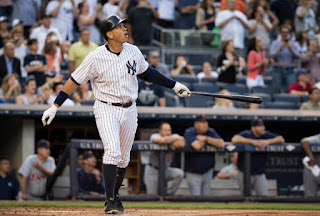 Alex Rodriguez: I'd first like to take credit for predicting A-Rod's 2015 resurgence. I'm hoping he can build off of the impressive numbers he put up last season, however the chances of that are rather slim. As the season progressed, Rodriguez began to look completely gassed. Hopefully, the Yankees can give him some more time off during the early months of the season, which would allow him to conserve energy for the games that really matter. Putting aside that the fact that he will be 41 in July, and is basically an injury waiting to happen, he is still our best right handed power bat. This fact alone should motivate Brian Cashman to improve the offense, however that seems to be a moot point at the current moment. Perhaps with a healthy Teixeira providing protection for him in the lineup again, Rodriguez can replicate, and hopefully exceed his 2015 stats. In order to give A-Rod his required rest, I would like to see Girardi give Beltran some more time at DH, while using Aaron Hicks as an option in Right field. Regardless of how some feel about A-Rod, he is critical to the team's offensive success.

Mark Teixeira: Perhaps the only player who is more important than Rodriguez on the offensive side is Mark Teixeira. Up until his injury in August, Teixiera put up MVP caliber numbers, and was a credible candidate to win Comeback Player of the Year. After Teixeira's injury, the entire Yankees offense collapsed, and went dormant up until their pathetic performance in the AL Wild Card Game. Greg Bird filled in admirably, however Teixeira's presence was clearly missed. Although his long injury history seems to indicate he will get hurt yet again in 2016, the Yankees need him if they plan on making a run. Teixeira's ability to provide a threat from both sides of the plate is something nobody else on this team, except Carlos Beltran, can provide. Bearing in mind this is a contract year for Teixiera, I expect big numbers out of him. He may not be a Yankee in 2017, but he will likely play somewhere else, therefore his success is not only important to the 2016 Yankees, but also his wallet. These two motivations should bring out the best in Teixeira yet again.

Carlos Beltran: Following A-Rod's decline in production, and Teixeira's injury, Beltran put the offense on his back. Unlike the rest of the offense, Beltran improved as the season progressed. After getting off to a dismal start, he got better each month. He also appeared to be the only player with a clutch bone in his body. Although he's mediocre in the field at this point in his career, Beltran's bat is very important to the Yankees. Beltran has indicated 2016 may be his final season, so this should provide even more motivation for him to finally win a championship. Similar to Rodriguez, the soon to be thirty-nine year old Beltran will need to be rested at times. While Rodriguez's presence forces Beltran to be the starting right fielder, both players should be given at least one day off per week in order to conserve energy for the stretch run. Hopefully, Beltran's clutch track record, in conjunction with his career likely coming to a close, will bring out his best in 2016.

Brian McCann: While McCann had some memorable moments in 2015, he essentially became a walking pop-up towards the end of the season. His inability to hit the ball the other way has made the job of opposing teams very easy. If he makes contact, it will either be a home run over the short porch in right field, or an out hit into the perfectly played shift. McCann has been incredible defensively, so I must give credit where credit is due, but I've come to second guess the signing. The Yankees likely would have been better off with Fransisco Cervelli and other internal options. If McCann can learn to hit the ball the other way with somewhat regularity, that can can have a significant impact on his overall production. The power numbers have been there, however his home run or bust approach has become exhausting, to say the least. McCann is being paid like a middle of the order guy, and it's about time he starts to produce like one.

Chase Headley: Oh, Chase Headley. Where do I start? After being acquired near the trade deadline in 2014, Headley performed relatively well both offensively and defensively. Once he was handed a four-year contract worth fifty-two million dollars, Headley became one of the worst players on the team. Every time a ball was hit in Headley's general direction I began to notice an acceleration in my heartbeat. Headley had twenty-three errors last season, and let us not forget the countless errors that were saved by Teixeira's defensive prowess. Offensively, he was also awful in 2015. It's hard to imagine Headley being worse than he was in 2015, so I guess it's reasonable to expect him to improve. I'm not too optimistic on this front, however if he can regress to his 2014 form I would take it. Nonetheless, he is our worst hitter and deserves to hit at the bottom of the order until he proves otherwise.

Jacoby Ellsbury: Ellsbury has the potential to become one of the worst contracts in Yankees history. After getting off to an amazing start, Ellsbury's 2015 season was derailed by injuries, as has been the case for his entire career. Ellsbury has the potential to be the best overall player on the team, and I really hope he can utilize that potential, but it requires staying healthy. Having been signed to serve as a potent table setter, Ellsbury hasn't come close to living up to his contract. If he can do his job by getting on base and setting up the guys in the middle of the order, the team is instantly improved. Ellsbury's potential to alter the course of a game, when healthy of course, is impressive. Unfortunately, we have yet to see these abilities consistently on display in the Bronx, but hopefully he can prove his detractors wrong in 2016.

Conclusion: As always seems to the case, the Yankees hopes are reliant on a number of veteran players. I'd also like to note why I kept Brett Gardner off this list. I am still holding out hope that the Yankees can flip him for a starting pitcher. If this is not the case, then his production is crucial to the team's playoff hopes for the same reasons as Ellsbury. That being said, it is highly unlikely every player I identified will stay healthy and produce. If even a handful of them produce to their fullest capability, the Yankees prospects for 2016 will be much brighter. It's about time that the players who are being paid the most amount of money begin to play up to their contracts. The Yankees put themselves in this position contractually. It's more important now, perhaps more than ever, that the Yankees highly paid veterans play to the back of their baseball cards because if they don't, as the roster is currently comprised, we could be looking at a dismal 2016 season.