Top Moments for Yankees in 2015

By Chad Raines - December 31, 2015
The 2015 season was a fun and surprising one for the Yankees. An aging team that wasn’t expected to contend, they exceeded expectations in part to a lethal offense and shut-down back end of the pen. There were a lot of great moments and here are the BBB’s selections for the best ones of the season.

While some may argue that the Yankees give to many monument park plaques, none can say that these three weren’t deserving. All three were integral parts of the late 1990’s dynasty years as they each served as a leader in the clubhouse and were the epitome of production. By immortalizing Posada, Pettitte and Williams just beyond the centerfield wall, fans and coaches alike took the time to reflect on the amount of success this homegrown bunch had achieved. 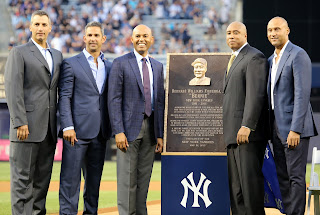 10) The Yankees score 21 runs against the Rangers
This game was truly something incredible. The Yanks were down 5-0 after the first inning and for most teams, this would be tough to come back from. However, the bombers went on to score 11 runs the very next inning, highlighted by four singles, three doubles and one triple. The destruction of Ranger pitching didn’t end there, as Chris Young dropped a grand slam in the 2nd inning and Brett Gardner tacked on a two run shot in the 9th. The Ranger’s didn’t even have a shot to make it a game as the unknown 27 year-old Diego Moreno silenced their bats through five innings of shutout ball. 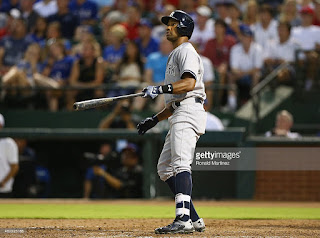 9) Greg Bird’s First & Second Major League Home runs
In this game on August 19th, Greg Bird single handedly beat the Minnesota Twins. With the Yanks seemingly unable to hit Ervin Santana, Bird smashed his first career major league home run, a two run shot to right field, that scored Carlos Beltran and gave them a 2-0 lead. Then in the 6th inning with the Yanks down 3-2, Bird hit another two run homer, this time to center field, that again scored Beltran and gave them the lead and ultimately, the win. It was this performance that showcased Bird’s much talked about power and gave the fan base a reason to be excited for the future. 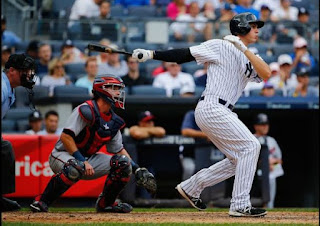 8) Michael Pineda strikes out 16 against the Orioles
On Mother’s Day, the inconsistent Michael Pineda delivered a gem. Pineda was utterly dominant as he stifled Oriole bats striking out the side in two different innings and having at least two strikeouts in each inning he pitched (7 innings total). Even more impressive, Pineda issued not a single walk throughout the game. As the season went on and frustrations grew with “Big Mike”, this performance early on in the season was a reminder of what he is capable of when he’s on top of his game.

7) A-Rod passes Willie Mays with his 661st home run
In a resurgent and surprising season for Alex Rodriguez that saw him reach many milestones, passing Mays was huge. Facing Chris Tillman of the Baltimore Orioles, Rodriguez socked a solo shot to centerfield to pass the legendary Willie Mays on the all-time home run list. A-Rod received his first curtain call of 2015 after this feat, continuing a season that no one saw coming. 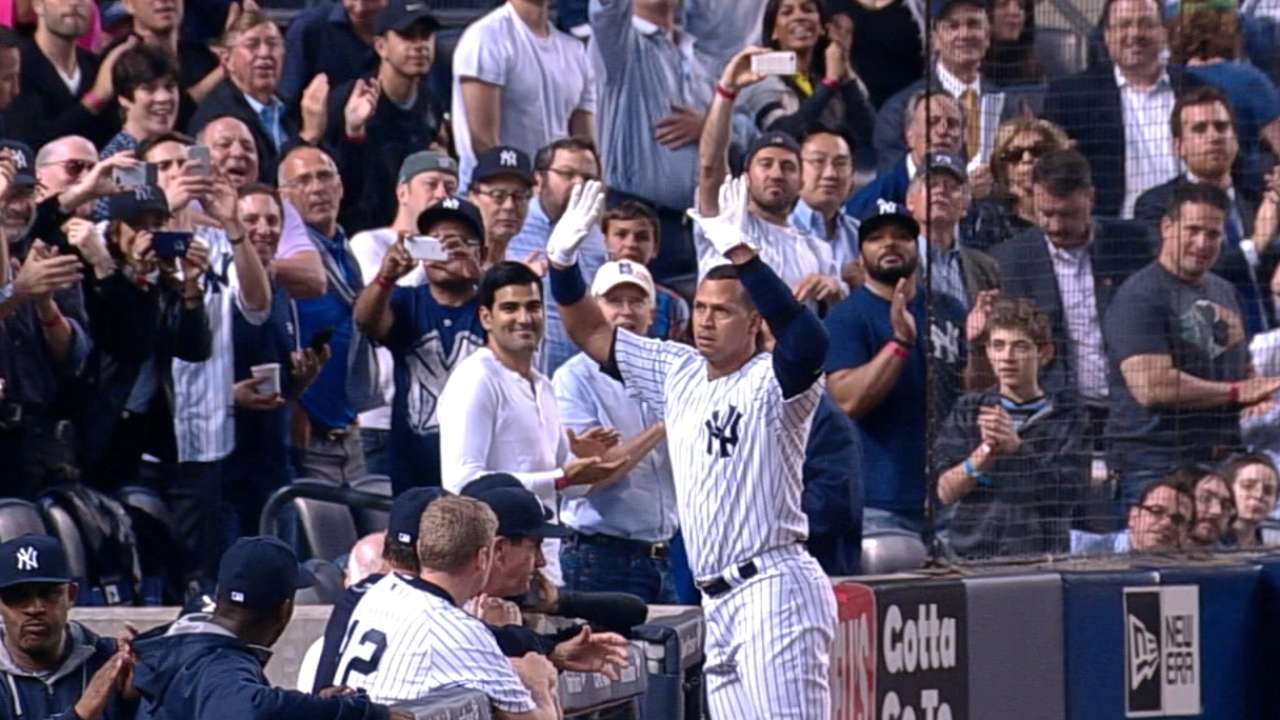 6) Luis Severino’s major league debut
August 5th, 2015 was the day that marked the start of the Luis Severino era in the Bronx, as the highly touted prospect made his much anticipated MLB debut. Against the Red Sox nonetheless, Severino impressed as he tossed five innings of one run ball, striking out seven, allowing only two hits and walking only one. He displayed refreshing intensity and emotion on the mound, often pumping his fists after striking out Red Sox hitters such as David Ortiz. Sevy’s debut was a welcome sight for an aging Yankee squad and this outing gave a glimpse of what Yankee fans can get used to as their youth movement moves forward. 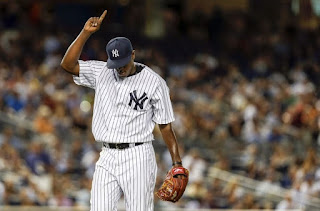 5) A-Rod’s pure dominance of the Minnesota Twins
This is more a collection of moments as Alex Rodriguez had quite a few of them against the Twins this season. Most notably, A-Rod had an incredible three home run game against them on July 25th. He first blasted a moonshot to the upper deck only to be followed by a two run shot to center field to bring the Yanks back into the game. Then in the bottom of the 9th with the Yanks down a run, Rodriguez did the impossible and hit his 3rd home run of the game off of Glen Perkins to tie it up. John Ryan Murphy (who is now a member of the Twins) sealed the game with a three run bomb. A-Rod’s reign of terror didn’t stop there as on August 19th he smacked a grand slam that gave the Yankees the lead after being down 4-1. These games were truly magical and further embodied the resurgent year Rodriguez was having.

4) Slade Heathcott’s home run against the Tampa Bay Rays
With C.C pitching like his old self on that September night, holding the Rays to one run, the Yankee bats couldn’t muster together any offense. It wasn’t until the 9th inning that A-Rod hit a double to score Brett Gardner and tie the game. After Brian McCann was intentionally walked, the inexperienced rookie Slade Heathcott, who hadn’t seen a major league pitch since June, came to the plate. Heathcott then went on to smash the very first pitch he saw from closer Brad Boxberger into the left field seats and give the Yankees the 4-1 lead. As Heathcott circled the bases, the fired up Yankees flooded out of the dugout to greet him. This game looked destined to be a tough loss to finally make the Yanks settle for the wild card, but with Heathcotts dramatic and improbable home run, it gave the team some much needed energy and hope.

3) Alex Rodriguez’s 3,000th hit
In a year filled with uncertainty, A-Rod silenced the critics with a tremendous effort, blasting 33 homers, one of which was his 3,000th hit. A moment I was lucky enough to witness in person, this was as a highly anticipated moment for fans and players alike. Rodriguez walked up to the plate with the entire stadium on their feet itching for some sort of hit. He went right to business, shooting Detroit ace Justin Verlander’s first pitch fastball the opposite way to right field. The stadium erupted in cheer and play stopped as both teams took a moment to congratulate A-Rod’s accomplishment, much like when Derek Jeter hit a home run for his 3,000th hit off of ace David Price. His 3,000th hit showed the Yankees change of heart as he had transformed from an unwanted name on the roster to a celebrated and vital part of the Yankees 2015 success.

2) Clinching the playoffs
Some may have their opinions on whether they consider the Wild Card game a true playoff game but no matter what way you put it, it’s postseason ball. For a franchise starved for any sort of postseason appearance, this was good enough, even though the Yankees had a big lead on the division earlier in the season. It was a welcome sight to see the Yankees popping champagne in the clubhouse and wearing the postseason shirts. For the fan base, it was nice to know that finally, the team was headed to the playoffs, even if it was just the Wild Card, which is still an accomplishment in itself. Seeing the red white and blue banners around the Stadium pair with the renewed energy in the Bronx was something that gave fans a taste of what they’d been missing.

1) Andrew Miller and Troy Tulowitzki’s Epic Battle in Toronto
Out of all the great moments of the 2015 Yankee season, this one has to take the top spot. In a game that had a playoff atmosphere, this intense battle between two of the game’s best topped it off. Carlos Beltran stunned the Blue Jays and silenced Rogers Centre when he smacked a pinch-hit three run homer to give the Yankees the 4-3 lead. Then, Andrew Miller came on to close out the game and hopefully give the Yankees the AL East lead. With the tying run on 3rd and Troy Tulowitzki coming to the plate, Miller faced a tough task. After 12 pitches, four mound visits and slider after slider, it came down to a full count. The crowd was roaring and the intensity was at an all-time high for everyone in the building. Miller threw yet another slider which Tulo wafted through and the Yankees won the ballgame. It was an incredible finish for a battle that will go down in Yankees history. This battle along with Beltran’s home run gave the Yankees the division lead and a much needed victory in the rivalry with the Blue Jays. To view gifs of the full at bat click HERE.

Which one of these moments was your favorite? If you have any moments that didn’t make the list, comment on the article or talk to us on twitter!