Why Andrew Miller should keep the closer role

By Unknown - December 29, 2015
Just like many Yankees fans, I was jumping for joy upon hearing the news that Brian Cashman acquired Aroldis Chapman for four lower level prospects yesterday evening. Putting possible suspension issues for Chapman's role in an October domestic abuse incident aside for a second, I've been thinking about who should be the team's closer. Andrew Miller was nothing short of amazing as closer last season, and I would hate to disrupt what had been the team's greatest, and arguably only, strength. The Yankees were 81-0 when leading after eight innings in 2015. I understand Chapman is one of, if not the best, reliever in baseball, however if it's not broken don't fix it. Andrew Miller's transition from elite set up man to elite closer could not have been any more successful. Chapman is an amazing proven talent, however Miller earned the job last season, and it's rightfully his. 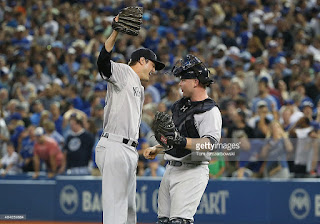 Handling the pressures that come with playing in New York City is no easy task. Time and again certain athletes have proven New York just wasn't the place for them. After David Robertson signed with the White Sox last offseason, the Yankees initially brought in Andrew Miller to serve as the set up man to Dellin Betances. Following some shaky performances from Betances in spring training and early on in the season, Miller earned the closer's job. Had it not been for an injury in early June that sidelined him for about a month, Miller would have likely made the All-Star Game. Despite missing a month, he posted Mariano Rivera-esque numbers. His thirty-six saves in thirty-eight opportunities were a much needed change from Robertson's Houdini acts. The consistency displayed by Miller in one of the biggest sports stages in the world is one of the many reasons he should retain the closer's job.

Assuming the Yankees hold on to Betances and Miller, which in all likelihood they will, Cashman may have assembled one of the most lethal late inning bullpens in baseball history. Having three elite relievers in one bullpen is not something you see everyday, and I fully expect the Yankees to utilize this unique opportunity to their fullest advantage. I understand Chapman throws 100 MPH and has been a perennial all-star since his defection from Cuba, however he has yet to do that in the Bronx. I recognize that my opinion may not be a popular one, and I fully expect to receive a number of criticisms, however I think the team is best served with Miller in the closer's role. Miller's numbers were not as dominant as those put up by his new teammate, however he was just as effective. In fact, Miller blew one fewer save with two more save opportunities.

Regardless of who closes, the Yankees will likely have three of the best relievers in the major leagues. Betances has served this team very well in the set up role for the last two seasons, and that's where we should expect to see him come 2016. Although Girardi has abused him, Betances's ability to pitch multiple innings has been an huge asset to the bullpen. Many fans may argue that having a lefty-righty-lefty combination to close out the game would be most beneficial to the team, however I believe that is irrelevant. As much as Girardi loves to base his pitching decisions off of his binder, with Betances, Chapman, and Miller, lefty-righty match ups should be irrelevant. These three relievers should be able to get anybody out, and I hope Girardi just gets out of the way and lets them do their jobs, but this is a conversation for another day.

I'd like to conclude at the same spot in which I began. If it's not broken don't fix it. Andrew Miller was a superb closer last season, not to mention he was the recipient of the 2015 Mariano Rivera Award. Chapman is an extraordinary talent, however he is still the new guy on the block. Miller earned the closer's title, and he should retain it unless his production falls off. Chapman should be grateful for even being able to pitch on a contender, and if his ego is too big to pitch as set up man then too bad. At the end of the day, both Chapman and Miller, and I'll even go as far as to say Betances, are more than capable of holding down the closer's job, however there is no need for a change at the present time. The addition of Chapman is a welcome one that undoubtedly makes the team's greatest strength even stronger, however the closer's job should continue to belong to Miller because he has earned that title in the Bronx.