Why Yankees should consider moving Eovaldi to the bullpen


Perhaps one of the most intriguing starting pitchers coming into the 2015 season was newly acquired RHP Nathan Eovaldi from the Miami Marlins last offseason. The hard throwing 25-year old righty led the Yankees with 14 wins before going on the disabled list in September. What alarms most Yankee fans about Eovaldi’s 2015 campaign was how well opponents hit against him. In 154.1 innings pitched, “Nasty Nate” surrendered 175 hits, one year removed from leading the league in hits allowed with 223 in 2014. He finished 2015 going 14-3 with a 4.20 ERA and an inadequate WHIP of nearly 1.50. 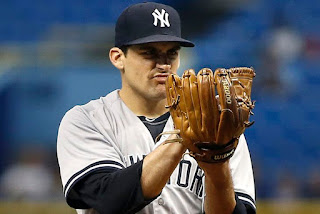 Barring any free agent signings or trades, the Yankees’ 2016 starting rotation candidates are Masahiro Tanaka, Luis Severino, Michael Pineda, CC Sabathia, Nathan Eovaldi, and Ivan Nova. Eovaldi has below average off-speed pitches paired with poor location which helps opposing lineups key in on him after seeing him multiple times over the duration of the game. Through pitches 1-30 batters hit .253 off of Eovaldi, but after eclipsing 46 pitches batters hit .362 off of him with an OPS .872! Perhaps Eovaldi’s strenuous delivery and sub-par pitching mechanics contributes to his diminishing numbers as the game goes on. Nonetheless, sending Nate to the bullpen would allow him to stay between 20-30 pitches per outing and would give opponents fewer opportunities to see his pitches. Slotting him into the 6th inning role with LHP Chasen Shreve would add to the already lethal 7-8-9 combination of Dellin Betences, Andrew Miller, and Aroldis Chapman.

Some pitchers simply thrive out of the bullpen more so than in the rotation. Moving Nathan Eovaldi to the bullpen is an intriguing possibility and something that I think manager Joe Girardi should strongly consider heading into Spring Training. After 4 years of mediocrity as a starter, it’s time to see if Eovaldi can have success out of the bullpen.