By Unknown - February 15, 2016
It's inevitable that each team will have not only its share of disappointments, but also pleasant surprises throughout the course of any given season. Heading into 2016, the Yankees have a number of players who could potentially fit the latter category. Although many players over performed in 2015, there were a number of let downs. I've identified five players- Jacoby Ellsbury, Brett Gardner, Chase Headley, CC Sabathia, and Ivan Nova, who line up as bounce back candidates for the 2016 season. While the team's overall success, in my opinion, is contingent on Ellsbury and Gardner forming a potent combination at the top of the lineup, the expectations for Headley, Sabathia, and Nova have been set relatively low. Of course, predicting this could be quite difficult, however I believe these five players have the best chance of bouncing back from disappointing 2015 campaigns. 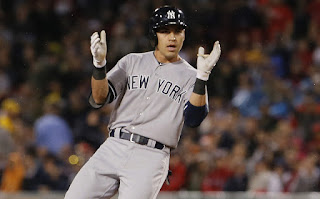 With the potential to become one of the worst contracts in Yankees history, it is imperative that Ellsbury step it up, and have a huge 2016. After getting off to an impressive start in 2015, his season was derailed by injury, as has often been the case throughout his career. There's no doubt in my mind that, when healthy, Ellsbury is the best overall player on the team. Ellsbury's athleticism makes him a threat with the bat, on the bases, and in the field. He can hit for power, while at the same time make contact at an impressive rate. If the Yankees truly want to become better at manufacturing runs, they need Ellsbury to get it going. This is why I was extremely perplexed when Joe Girardi kept the $153 million dollar man on the bench during last year's AL Wild Card game, but for the sake of this piece I won't re-litigate past mistakes.

In a previous piece, I identified a bounce back year from Ellsbury as one of the main keys to the team's overall 2016 success. Similar to Brett Gardner, who will be discussed next, Ellsbury has demonstrated some frustrating inconsistencies. Unlike Gardner, however, Ellsbury has proven that he can be an elite player. At thirty-two years of age, it would be reasonable to expect at least 3 more years of top of the line production from Ellsbury. When GM Brian Cashman, foolishly some would argue, handed Ellsbury a monstrous contract, he expected that these first few years would be filled with elite production, and as is the case with many long-term contracts, pay for his struggles at the end of the contract. Unfortunately for the Yankees, this has not been the case. Needless to say, the Yankees NEED Ellsbury to pick up where he left off prior to being injured, and perform at an all star level if the offense is to exhibit any level of dynamism.

Brett Gardner is similar to Ellsbury, in a lot of ways, however his pay check is much smaller. That being said, I would argue that he is just as important to the team's success as Ellsbury. On the one hand, Gardner has been one of streakiest players in MLB for some time now, however he also played at an all-star level during the first half of 2015, before cooling off considerably in the second half. It's amazing how it can be close to impossible to get Gardner out one week, and the next week he can become an automatic out. I was a huge proponent of trading him this offseason for starting pitching depth, but that ship has sailed and we must look forward.

If the Yankees can get steady production from Ellsbury and Gardner at the top of the lineup, then these two table setters, along with Didi Gregorius and the recently acquired Starlin Castro make the offense much more dynamic than it has been in recent years. While Gardner has been an outstanding fielder, there are other aspects of his game that need improvement. Aside from his offensive inconsistencies, he needs to improve his baserunning. It is unfathomable to me that a guy with Gardner's speed is such an awful baserunner. Not only is he mediocre when it comes to stealing bases, but he has also made some blunders on the base paths that have been costly to the team in big spots. Fortunately, this is more about technique than talent so there's much room for improvement. If Gardner can stay healthy, discover some consistency, and become a better baserunner, then watching him and Ellsbury set the table for the middle of the lineup should be quite exciting.

Unlike Ellsbury and Gardner, the Yankees successes aren't really contingent on Chase Headley. After being signed to a four-year contract, Headley answered with one of the worst seasons of his career. In the field, he was flat out dreadful. His twenty-three errors lead the team, and that number should be much higher when we take into account the number of errors that were saved by Mark Teixeira's defensive prowess at first base. Offensively, he wasn't much better. Every time Headley came up it seemed as if he was killing a rally. He was one of the main perpetrators of the infamous #RISPFail hashtag that came to define the 2015 season.

With expectations so low going into 2016, hopefully Headley can surprise us. After being acquired in July 2014, Headley provided the Yankees offense with a much needed boost. He even demonstrated an ability to perform in clutch scenarios. The Yankees don't need Headley to be a superstar, however consistent offensive and defensive production would be an amazing revelation. In my opinion, Headley should bat ninth in the order because he is clearly the worst everyday player in the lineup, however Girardi will never do that so we're likely stuck with him in the seventh hole. At the bottom of the order, the pressure won't be mounting. I'm not expecting much out of Headley personally, however I think he's a great bounce back candidate because it would be quite difficult for him to perform worse than he did in 2015.

It's painfully obvious that CC Sabathia is no longer the durable horse that us Yankees fans had been accustomed to seeing from 2009-2012. As we have learned, he is a shadow of his former self. Similar to last season, the expectations for Sabathia are rather low, but this can be a good thing. After struggling for most of 2015, he seemed to discover something during his last couple of starts with a new knee brace. Maybe this was just a string of a few lucky starts, or maybe he can adjust to pitching with diminished velocity like his good friend Andy Pettitte did at the tail end of his career.

Even if the Yankees publicly state that Sabathia is competing for a rotation spot, as reasonable fans we should call their bluff and realize they don't really mean that. The Yankees have too much respect for Sabathia to relegate him to the bullpen. Not to mention, he is earning upwards of $25 million this season. Despite his limited abilities, Sabathia's veteran presence will surely be an asset in such a young rotation. As the number five starter, the Yankees will not need Sabathia to anchor the rotation, but instead be a complimentary piece. With his alcohol problems presumably behind him, Sabathia should be motivated to redeem himself. Being the competitor that he is, I wouldn't be surprised if he built upon his late 2015 success in 2016.

It appears as if Ivan Nova is the odd man out of a crowded rotation. While Nova has publicly stated his desire to remain a starter, he must realize that barring injury he will start the season in the bullpen. After returning from Tommy John surgery last season, Nova was utterly horrendous. Every time he started, I knew the Yankees would have to score a lot of runs to keep the game competitive. Nova's career has featured a number of ups and downs so we should be used to his inconsistencies by now. Heading into a contract year, I expect to see a motivated Nova to come into spring training, and this should serve the Yankees best interests.

With the amount of injury risks in the Yankees rotation, it is inevitable that one of them will be hurt for a prolonged period. Hopefully, Nova can step up and prove that he still has what it takes to be a MLB capable starter. I've never been a fan of Nova, however money is anybody's prime source of motivation. Similar to Headley and Sabathia, having low expectations should serve him well come 2016. I have a feeling that he will be relied upon as soon as one of our fragile starters suffers an injury.

With so many question marks heading into the 2016 season, chances are some will be answered in the affirmative column. That of course means that some will obviously not be. I personally believe Ellsbury and Gardner are best positioned to have bounce back years. Whether or not this occurs could very well determine if the Yankees are a playoff team. Who do you think will have a bounce back year in 2016? Let us know!