By Unknown - February 14, 2016
The Yankees face an interesting dilemma when it comes to their 5th round pick from the 2015 draft. RHP Chance Adams was drafted out Dallas Baptist University, and many scouts believe he has the potential to be an elite reliever in the majors. But do the Yankees have other plans for the 6’0” righty? 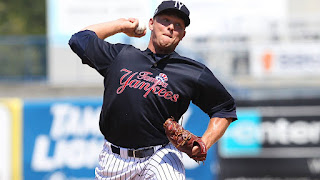 
Breakdown
While Adams mid-90’s fastball and sharp slider have served him well in relief, the Yankees believe his circle-change and cutter are good enough to justify potentially transitioning Adams to a starter. The righty hasn’t worked as a starter since 2014, but the Yankees have switched several relievers to starters in recent years, so this move could come to fruition before the 2016 season is underway.

Projection
The righty will most likely start the season in A+ or AA, depending on whether the Yankees want to develop him as a starter or reliever. This decision will heavily impact the duration of Adams road to the show, as if he continues to dominate minor league hitters in relief, it’s reasonable to believe we could see Adams in pinstripes in 2017, if not sooner.

While leaving Adams as a reliever would expedite his journey to the Bronx, perhaps the Yankees may reap more from the RHP as a starter. It may be worth beginning Adams 2016 season back in high-A ball as a starter to see how the four-pitch pitcher fares in this role. If Adams repertoire doesn’t translate well to the rotation, he could easily return to pitching in relief.

Regardless of what path the Yankees decide to take for Adams, if the righty can continue to dominate hitters as he progresses through the minors, Yankees fans can expect to see Adams in the Bronx in no time.

You can view his minor league statistics here.

You can keep up with our full top 30 list with links to our breakdowns HERE.