By Unknown - February 13, 2016
Signed in November 2012 as an international free agent for only $49,000 along with higher touted prospects Jorge Mateo and Luis Torrens, infielder Thairo Estrada is slowly emerging as one of the most underrated members of the Yankees farm system after conquering short­-season ball as one of the youngest members of the New York­ Penn League in 2015 at the age of 19. 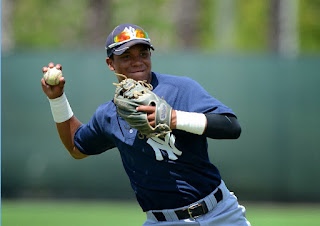 Breakdown
Listed at only 5’10” and 155 lbs, Estrada has been playing in the Yankees system for three years now, making his debut as a 17 year old for the Yankees Gulf Coast League team and hitting .278 in 49 games. In 2015, Estrada played for Staten Island and hit .267 with two home runs and 23 RBIs in 63 games. With only four home runs in 504 minor league at bats, don’t expect Estrada to ever hit for power.

Projection
With the Yankees possessing quality middle infield depth across the pipeline, Estrada will likely begin the 2016 season with the full season Charleston Riverdogs and continue to develop as an all­around player looking to find a niche at either shortstop or second base.

You can view his minor league stats here.
You can keep up with our full top 30 list with links to our breakdowns HERE.